This METHOD can be applied to any one of the HTTP verbs – get, set, put, delete. An alternate method also exists, which executes independent of the request type.

Path is the route at which the request will run.

Handler is a callback function that executes when a matching request type is found on the relevant route. For example,

If we run our application and go to localhost:3000/hello, the server receives a get request at route "/hello", our Express app executes the callback function attached to this route and sends "Hello World!" as the response. 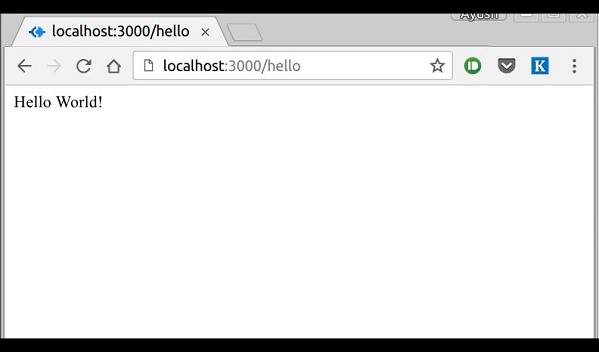 We can also have multiple different methods at the same route. For example,

To test this request, open up your terminal and use cURL to execute the following request −

A special method, all, is provided by Express to handle all types of http methods at a particular route using the same function. To use this method, try the following.

This method is generally used for defining middleware, which we'll discuss in the middleware chapter.

Defining routes like above is very tedious to maintain. To separate the routes from our main index.js file, we will use Express.Router. Create a new file called things.js and type the following in it.

Now to use this router in our index.js, type in the following before the app.listen function call.

The app.use function call on route '/things' attaches the things router with this route. Now whatever requests our app gets at the '/things', will be handled by our things.js router. The '/' route in things.js is actually a subroute of '/things'. Visit localhost:3000/things/ and you will see the following output. 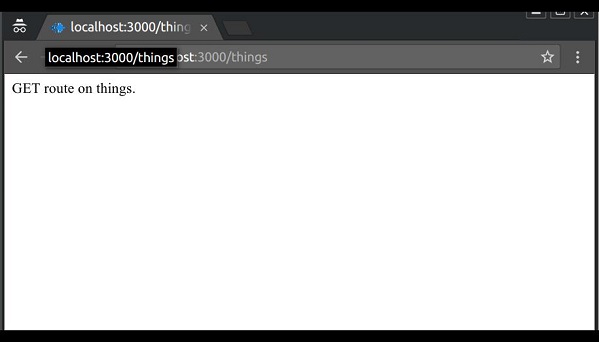 Routers are very helpful in separating concerns and keep relevant portions of our code together. They help in building maintainable code. You should define your routes relating to an entity in a single file and include it using the above method in your index.js file.