What is Virtual Memory?

Virtual memory can give programmers the deception that they have a very high memory although the computer has a small main memory. It creates the function of programming easier because the programmer no longer requires to worry about the multiple physical memory available. 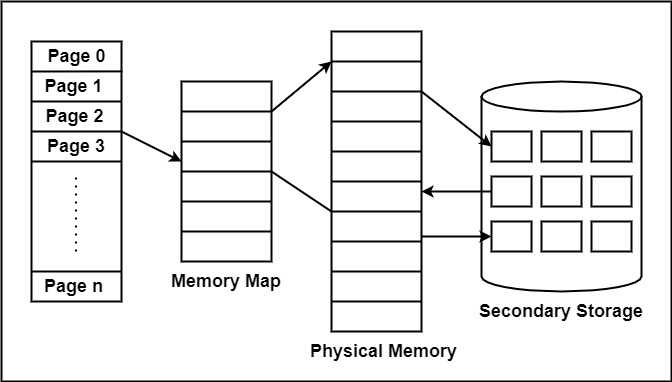 Virtual memory works similarly, but at one level up in the memory hierarchy. A memory management unit (MMU) transfers data between physical memory and some gradual storage device, generally a disk. This storage area can be defined as a swap disk or swap file, based on its execution. Retrieving data from physical memory is much faster than accessing data from the swap disk.

Paging is a technique of memory management where small fixed-length pages are allocated instead of a single large variable-length contiguous block in the case of the dynamic allocation technique. In a paged system, each process is divided into several fixed-size ‘chunks’ called pages, typically 4k bytes in length. The memory space is also divided into blocks of the equal size known as frames.

There are the following advantages of Paging are −

There are the following disadvantages of Paging are −

Unlike pages, segments can vary in size. This requires the MMU to manage segmented memory somewhat differently than it would manage paged memory. A segmented MMU contains a segment table to maintain track of the segments resident in memory.

A segment can initiate at one of several addresses and can be of any size, each segment table entry should contain the start address and segment size. Some system allows a segment to start at any address, while other limits the start address. One such limit is found in the Intel X86 architecture, which requires a segment to start at an address that has 6000 as its four low-order bits.