What is Auxiliary Memory?

An Auxiliary memory is referred to as the lowest-cost, highest-space, and slowest-approach storage in a computer system. It is where programs and information are preserved for long-term storage or when not in direct use. The most typical auxiliary memory devices used in computer systems are magnetic disks and tapes.

A magnetic disk is a round plate generated of metal or plastic coated with magnetized material. There are both sides of the disk are used and multiple disks can be stacked on one spindle with read/write heads accessible on each surface.

All disks revolve together at high speed and are not stopped or initiated for access purposes. Bits are saved in the magnetized surface in marks along concentric circles known as tracks. The tracks are frequently divided into areas known as sectors.

In this system, the lowest quantity of data that can be sent is a sector. The subdivision of one disk surface into tracks and sectors is displayed in the figure. 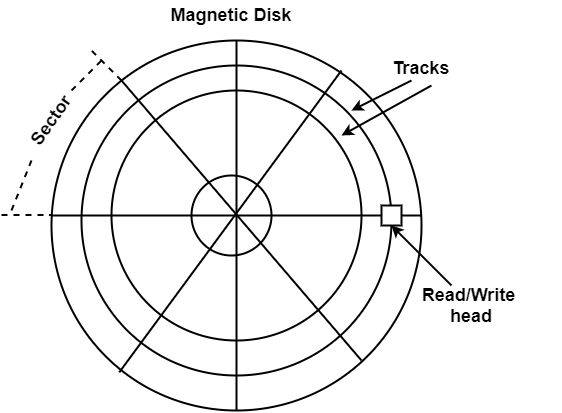 Magnetic tape transport includes the robotic, mechanical, and electronic components to support the methods and control structure for a magnetic tape unit. The tape is a layer of plastic coated with a magnetic documentation medium.

Bits are listed as a magnetic stain on the tape along various tracks. There are seven or nine bits are recorded together to form a character together with a parity bit. Read/write heads are mounted one in each track therefore that information can be recorded and read as a series of characters.

Magnetic tape units can be stopped, initiated to move forward, or in the opposite, or it can be reversed. However, they cannot be initiated or stopped fast enough between single characters. For this reason, data is recorded in blocks defined as records. Gaps of unrecorded tape are added between records where the tape can be stopped.