Paging is a storage structure that enables the operating framework to fetch processes from the secondary storage into the main memory in the form of pages. In the Paging method, the main memory is split into small fixed-size blocks of physical memory, which is known as frames. The size of a frame must be preserved the same as that of a page to have maximum use of the main memory and to prevent external fragmentation.

Paging changes pages from the swap disk to frames of the physical memory therefore data can be accessed by the processor. Any page can involve any frame. This leads to multiple issues that should be undertaken by a paging system −

All of these issues are managed by the memory management unit (MMU). As displayed in the figure, the logical address is output from the CPU to the MMU. The MMU converts this address to a physical address, which is supplied to the cache and physical memory. If the data is not placed in physical memory, it creates a page fault and changes the page from the swap disk to a frame, eliminating another page if essential. 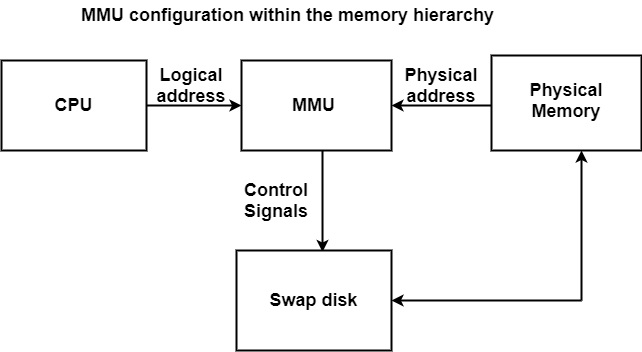 Instead, it is more like “output the data from location 3234H because that is where the MMU says the CPUs logical address is mapped to,” and it is not necessary to know what that logical address is. Neither the CPU nor memory needs to know the other’s memory address because the MMU handles the translation for them.