What is the Pipelined execution of Load/Store Instructions in Computer Architecture?

It can summarize the subtasks which have to be performed during a load or store instructions as shown in the figure. 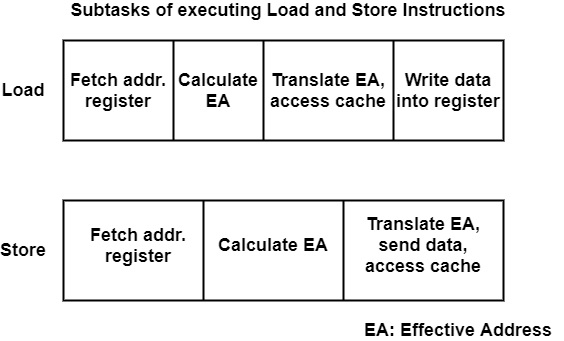 Let us first consider a load instruction. Its execution begins with the determination of the effective memory address (EA) from where data is to be fetched. In this case, like RISC processors, this can be done in two steps: fetching the referenced address register(s) and calculating the effective address.

In the CISC processor, address calculation may be a difficult task, requiring multiple subsequent registers fetches and address calculations, as in the case of indexed, post-incremented, relative addresses. Once the effective address is available, the next step is usually to forward the effective (virtual) address to the MMU for translation and to access the data cache.

In traditional pipeline implementations, load and store instructions are processed by the master pipeline. These loads and stores are executed sequentially with other instructions as shown in the figure. 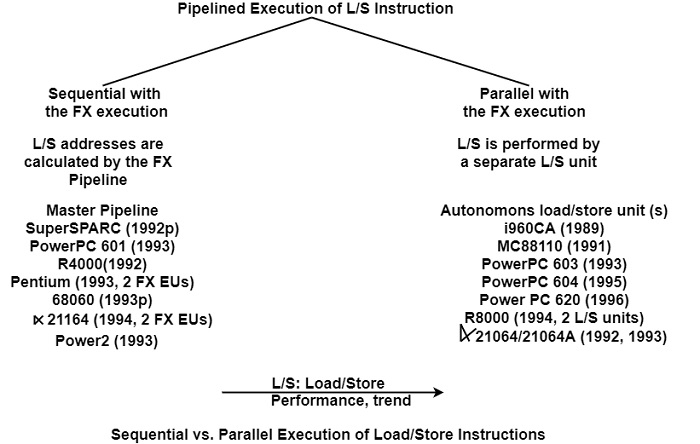 Representatives of this low-cost implementation approach are the MIPS R4000, Pentium (with two integer units), PowerPC 601, Power2, and DEC α 21164 (also with two integer units). At first glance, it is surprising that the α 21164 uses a sequential load/store processing technique when the preceding α 21064 and α 21064A provided a dedicated autonomous load/store unit.

A more effective address technique for load/store instructions processing is to do it in parallel with data manipulation as shown in the figure. This approach assumes the existence of an autonomous load/store unit that can perform address calculation on its own.

Autonomous load/store units can either be operated lock-stepped with the processing of other instructions or work decoupled. In the lockstep, load and store requests to the memory (cache) are issued in order. Alternatively, the execution of load and stores can be decoupled from the execution of other instructions to boost performance. This can be achieved by providing queues for pending loads and stores and executing those operations from the queues.