What is the implementation of FX Pipelines in Computer Architecture?

All earlier designs and several current designs, such as i486, also utilize the same universal FX pipeline for the execution of load/store and branch instructions. This seems to be quite natural since load/store and control transfer instructions require address calculations which can easily be carried out using the integer pipeline.

The disadvantage is that all loads/stores and branches are restricted to being performed sequentially with the integer and Boolean operations, which considerably impedes performance. 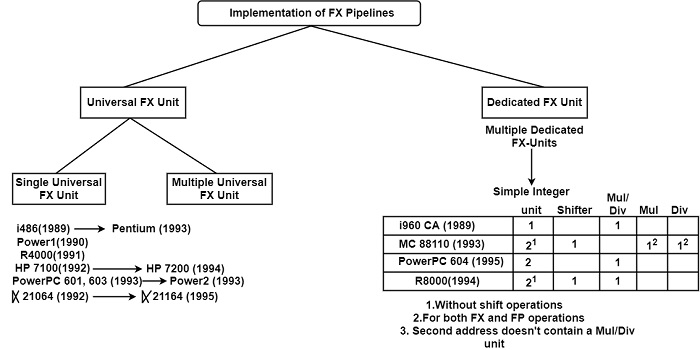 A further step in boosting performance can be achieved by applying multiple FX pipelines, that is, multiple pipelined FX units. As far as the number of FX units is concerned, it is worth referring to dynamic instruction distributions, which shows that 30-40% of all executed instructions are integer and Boolean. Therefore to exploit more parallelism, providing more than one FX unit seems inevitable.

In this method, it must be pointed out that integer division is usually not pipelined. For all processors, the division requires a considerable number of cycles (in the order of 10-100).

The other approach is to use a set of dedicated units, such as simple FX units, multiple/dividers, or separate multipliers and dividers, shifters, and so on. As shown in the figure, the early 1960 CA, the first superscalar processor, or several high-end superscalar processors such as the PowerPC 604, PowerPC 620, or R8000 serve as examples of this approach.

Except for the early 1960 CA, these processors usually contain two simple FX units (providing multiply/divide capabilities) and implement the multicycle integer operations either using a common dedicated multiplier/divider unit (Such as the PowerPC 604 or the R8000) or by a couple of separate multipliers and a separate divider, such as the MC 88110.