What is D Flip Flop?

The D flip-flop is a clocked flip-flop with a single digital input ‘D’. Each time a D flip-flop is clocked, its output follows the state of ‘D’. The D Flip Flop has only two inputs D and CP. The D inputs go precisely to the S input and its complement is used to the R input.

Considering the pulse input is at 0, the outputs of gates 3 and 4 are at the 1 level and the circuit cannot convert state regardless of the value of D. The D input is sampled when CP = 1. If D is 1, the Q output goes to 1, locating the circuit in the set state. If D is 0, output Q goes to 0, and the circuit switches to a clear state.

The truth table for D flip-flop is as shown in the table.

The logic symbol for the D flip-flop is shown in the figure. 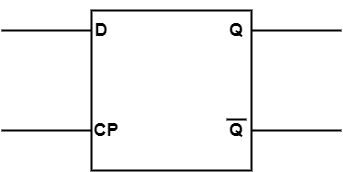 The D flip flop obtains the destination from its capacity to manage data into its internal storage. This type of flip-flop is known as a gated D-latch. The CP input is provided given the destination G (for gate) to denote that this input allows the gated latch to create applicable data entry into the circuit.