What are the Protocol Hierarchies in Computer Networks?

A protocol is nothing but a set of rules which are followed by the communicating entities for data communication.

The protocol depends on the following −

Before discussing every protocol in hierarchy, let us illustrate the position of each protocol relative to the others in the protocol hierarchy.

A protocol is a standard which controls or enables the connection, communication, and data transfer between computing endpoints. Protocols can be implemented by hardware, software, or a combination of the two.

Generally to reduce the complexity of network software design , most networks are organized as a series of "layers" or "levels”. The different number of layers, the name of each layer, and the function of every layer differ from network to network.

The purpose of every layer is to offer a certain service to the higher layers, shielding those layers from the details of how the offered services are actually implemented.

Layer n in one machine carries on a conversation with layer n on another machine, the rules and conventions used in this conversation are collectively known as layer n "protocol".

The structure of five layer protocol is as follows − 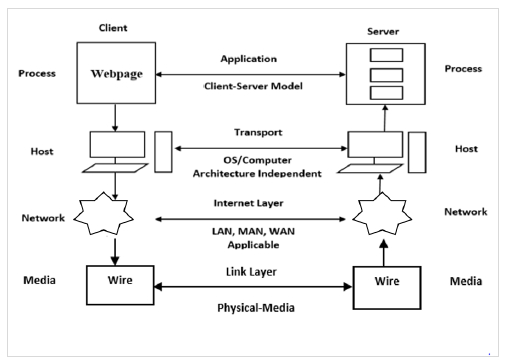 Now, consider how to provide communication to the top layer of five-layer network in below figure −