What is binary countdown protocol in computer networks?

The binary countdown is explained below in stepwise manner −

Step 2 − A station wants to use the channel. It has to broadcast its address as a binary bit string starting with a high order bit.

Step 3 − All addresses are assumed to be the same length.

Step 4 − The bits in each address position from different stations are Boolean OR together by the channel when they are sent at same time. WE will call this type of protocol binary countdown.

Step 5 − It implicitly assumes that the transmission delays are negligible so that all stations instantaneously see the asserted bits.

Step 6 − To avoid conflicts an arbitration rule must be applied, whenever a station sees that the high order bit position that is 0 in address has been overwritten with 1 and it gives up.

Step 7 − After winning the bidding a station now transmits a frame after which another bidding cycle starts. 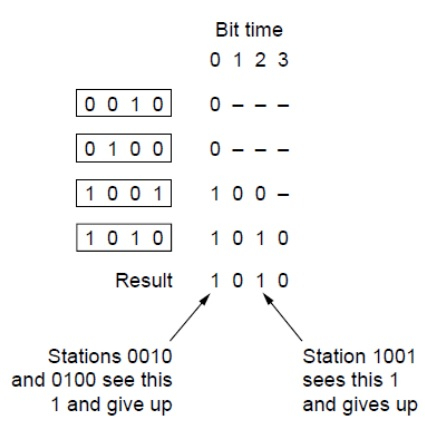 The frame format has been chosen so that the sender’s address is the first field in the frame, even these log2N bits are not wasted and the efficiency is 100%.

Binary countdown is an example of simple, elegant, and efficient protocol.