In order to lift or move any material, the lever is used. Sometimes the lever helps to push against materials but does not move them actually. It generally works in order to decrease a certain amount of effort force that is necessary to move loads. All lever provides mechanical advantages but a longer one provides greater mechanical advantages. They can also be used in order to exert a large force over a small distance at 1 end and a small force over a long-distance at the other side. Levers can be used for various purposes like lifting heavy loads, removing nails that are embedded in the wood, and even cutting objects.

What is a lever?

Lever makes the process of lighting heavy materials easier. It also helps to remove tight objects like nails from the hard surfaces. There are several types of the lever that are commonly used in everyday life. Lever like hammer claws are basically used for the purpose of removing nails that are embedded in wood (Letstalkscience, 2020). A wheel bar is also referred to as a lever that is utilized daily as it helps in the transportation of heavy loads from one place to another. Scissors are also considered one of the types of a lever that are often used to separate or cut materials. Tweezers are also a lever that helps to remove or lift items that can be heavy or light.

Parts of a lever

There are three major parts of a lever that helps to transport heavy loads from one place to another. The parts are mentioned below.

Figure 1: Parts of a lever

The lever beam is a long plank that can be of metals, Woods, and any other durable materials. The beam that rests on the fulcrum is referred to as the point on the bar that creates a pivot (Barger, 2019). On pushing one end of the lever downwards the input is applied to it and lever pivots that are on the fulcrum will produce output force on load.

Lever helps in the reduction of force amount that is essential in order to move material or even lift a heavy or light load. With the help of a lever, the distance gets enhanced by which the force acts. Thus, it makes the work more efficient and easy by spreading the effort out over a greater distance. 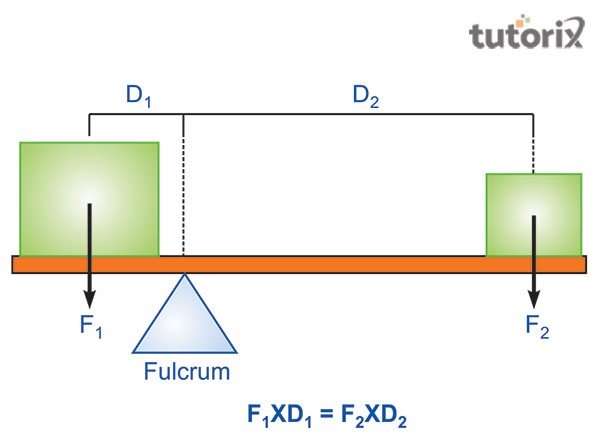 Figure 2: Formula of a lever mechanism

It is often found that when the 2 equivalent force acts in the opposite direction that is counter clockwise and clockwise, they are applicable to a uniform lever at the same distances from its fulcrum. They also counteract one another and also prepare an equilibrium state in lever.According to the theory of moments it can be stated, that in order to overcome greater distance with a small force the lever is used at a greater distance from the fulcrum.

For example, while using screwdrivers, the lid of it can be lifted from a point where the effort is exerted over a large distance tan load. Here, the fulcrum is denoted as the rim of tin that lies closer to the load that has a larger force exerted on to load required for opening the tin.

Figure 3: Classes of a lever

The machine that can be used to enhance the force is determined as levers. They have 2 main parts like a fulcrum and handle. The bar or handle of the lever is denoted as the arm that is been pulled or pushed while exerting force on loads or transporting a load. Fulcrum is the point upon which the lever rests, balances, or rotates. There are various forms of levers that are being used in everyday life. Those are scissors, teeter-totters, nutcrackers, pliers, bottle openers, brooms, wheelbarrows, hockey sticks, and baseball bats.

Q1. What do you mean by a lever in physics?

Ans. The lever is determined as the long and sturdy body that rests on support denoted as fulcrum. It is the rigid body that has the capability of rotation on a specific point by itself. Some of the commonly used levers are scissors, Hammer claws, wheel bars, and tweezers.

Q2. What are the different classes of levers?

Q3. What are the major parts of a lever?

Ans. A lever mainly has three main parts that are the fulcrum, load and effort. Fulcrum is considered to be the point where the reaction of the lever occurs, the load is the output force and effort is the input force applied to a lever.

Q4. What do you mean by the mechanical advantages of a lever?