Force mainly defines the pulling or pushing of an object and force is the most important part of the movement of objects. It can also be called the quantitative interaction between two physical bodies. The two bodies here are the environment and the object. Different types of forces can be seen in this part and among them Contact forces and Non-Contact forces are the most important. In this part Non-Contact forces is classified into three parts- Nuclear Force, Gravitational Force, and Electromagnetic Force. The Contact forces also have many variations like- Tension Force, Air Resistance Force, Frictional Force, Normal Force, Applied Force, and Spring Force. These are the main concept of the types of forces in physics.

Force is associated with the external effect that alters or tends to alter the state of motion of a particular body. In case the body is in motion it comes to a rest. Similarly, if a force is applied to a body that is in a state of rest the body comes to a motion. The applied force might also result in the change in the direction of the motion of the body and it also continues in alteration in the shape and size of the object (geeksforgeeks 2022). For example, the pushing and pulling of the door is done by applying a certain amount of force

Force is also classified as a vector quantity. This implies that the force has both the quantities of magnitude and direction. As per, Newton’s second law, force is defined as the product of the mass and acceleration of a body. The SI unit of force is Newton, denoted by N.

This is the force that is generally applied on the ends of cable, rope or string. The force is directed to the length of the object and it pulls energy equally from both ends (oxscience 2022). Mathematically,

T = mg + ma, here T is the tension, m is mass and g is the gravitational force acting on the body

This is classified as the the restoring force, that is, in case a force acts on a particular body that either compress or stretches then the acting force restores the equilibrium position. Mathematically, it is mentioned as

This force is applied by one body on the other that results in an alteration in the velocity of the body or alters the direction of the body. 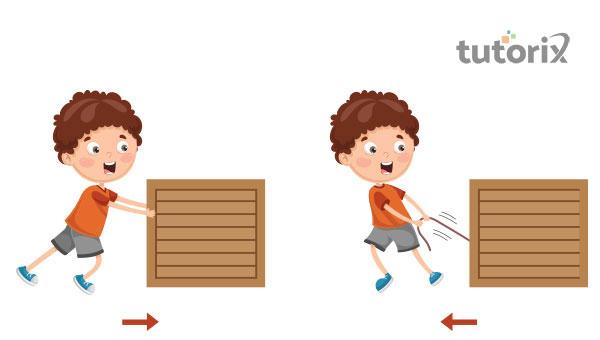 There are three kinds of applied forces

Non-contact force is associated with the force that does not involve any case of physical contact between one another. There are three types of non-contact forces.

Forces have various effects and the acting of force will accelerate or decelerate the body. It helps in giving motion to the body and it is the fact through which the speed of a moving object can increase (Zhang et al. 2018). Another important part of the effects of force is that with its application of it the speed of a moving object can also be decreased. An object’s direction can be changed through the application of force. The size and shape of an object get affected using force.

Q1. What is the concept of force?

Q2. How many types of Contact forces can be seen?

In physics, Contact forces are of six types and they occur from a distance. They are Normal Force, Frictional Force, Applied Force, Air Resistance Force, Tension Force and Spring Force.

Q3. What are the types of Non-Contact forces?

There are mainly three types of Non-Contact forces present on Earth. They are Gravitational Force, Electromagnetic Force, and Nuclear Force. All the forces have their different applications.

Q4. What is meant by gravitational force?

Gravitational force refers to the force acting between objects due to presence of matter. The gravity of Earth on the objects is an example of this factor.