The Brain: Anatomy and Function

Humans have developed cognitive capacities that distinguish them from other living organisms. Our brain performs several unexpected activities. To begin with, it is heavy, weighing 3 pounds, which is significantly more substantial than other creatures when compared to human physical size. According to research, specific regions in the human brain are allocated for language processes. What are the names of several areas of the brain? How do they collaborate in order to do basic and complicated tasks? This article investigates the many sections of the brain and their functions.

The human brain is the body's command center, a complex organ responsible for practically all of our body's operations. It controls activities like thinking, memory, sensory perception, motor movements of the body, and all life-sustaining systems such as breathing, homeostasis, digestion, and so on. The central nervous system is composed of the brain and the spinal cord work together.

The prosencephalon, mesencephalon, and rhombencephalon are positioned craniocaudally at first. The presence of many flexures significantly alters their relative location. They are as follows −

As in adults, these flexures lead to the orientation of distinct brain areas.

Functions of the Brain

The brain is primarily responsible for communication. It accomplishes this by transmitting and receiving signals. These messages are sent throughout the body via electrical and chemical impulses. These signals are in charge of a variety of processes. Furthermore, the brain's role is to comprehend each of them. For example, the brain perceives pain when the finger pricks itself. Some messages are kept in the brain, while others are transmitted back to the brain via the spine and the enormous network of nerves that runs throughout the body. This function is carried out effectively by the neurological system. Billions of neurons support this mechanism. How can the brain do such complicated tasks daily? Our brain contains several structures, each of which serves a specific purpose.

The Anatomy of the Human Brain 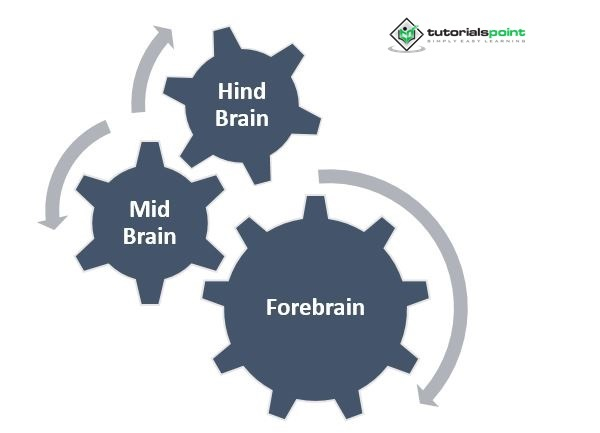 What are the Functions of Various Brain Structures?

Each of the structures has important functions. They are discussed below.

Parts of the Hindbrain

Parts of the Midbrain

The midbrain is the brainstem's highest region, linking the hindbrain to the forebrain. It is around 2 cm long. The cerebral aqueduct, its cavity, links the third and fourth ventricles. The nucleus of origin for cranial nerves III (oculomotor) and IV are located in the midbrain (trochlear). In addition to the cranial nerve nuclei, the midbrain contains nuclei that coordinate eyeball movement in response to visual inputs, which are positioned at superior colliculi. The inferior colliculi include nuclei that coordinate head and trunk motions in response to auditory inputs.

The tectum is the portion of the brain that is dorsal to a transverse line drawn through the cerebral aqueduct. It is made comprised of the superior and inferior colliculi on both sides. As a result, it is also known as corpora quadrigemina. The cerebral peduncles are left with right and left portions that lie ventral to the transverse line. Each peduncle is made up of three sections. The crus cerebri (also known as the basis pedunculi), the substantia nigra, and the tegmentum are anterior to posterior.

Parts of the Forebrain

It is regarded as the most significant component of the brain since it controls all motor, emotional, and cognitive functions. We will talk about the hypothalamus, thalamus, limbic system, and cerebrum—the forebrain's four principal regions.

The human brain is a wonderful and complex organ, and it has evolved to perform various functions that are unique to humans. Brain imaging studies contrasting the brains of humans and other primates reveal that humans have more fibers connecting the brain regions involved in such human-specific skills as language, tool building, reasoning, and social cognition, in addition to having more neurons in the association cortex. The brain has several structures that perform a variety of complex behaviors that humans showcase.