How do we achieve such fine movements and functions when learning, memorizing something, or even walking around the grocery store? While the body's mechanisms are not considered as central frequently, it is a piece of intricate machinery that aids in many functions. 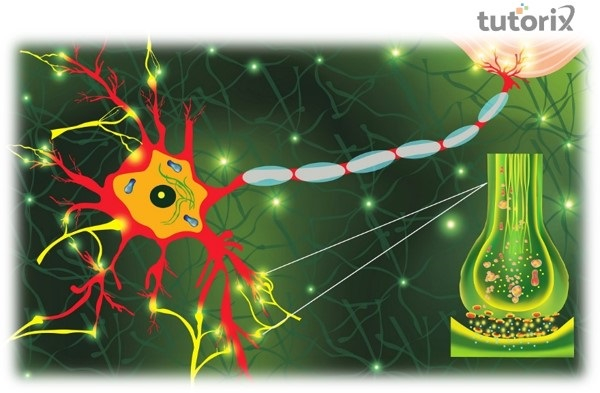 All animals' and humans' brains contain neurons that constantly interact and exchange chemical signals. These cells resemble long threads with extensions that resemble fingers on either end. The fingers act as transmitters on one end and as antennae on the other. Neurons do not interact with one another. Synapses are the spaces that exist between one transmitter and another antenna. When a messenger protein (neurotransmitter) is received at the antenna, a series of cellular events occur that cause a messenger protein to be conveyed from the cell's opposing end. Like a domino effect, these molecules go from one antenna to the next as they cross the synapse. The neuron is once more at rest and prepared for the next wave as messenger molecules are broken down or reabsorbed.

Through these fingers, tens of millions of neurons may be linked together, not simply in succession but also in an almost endless number of branching networks, elicited as synaptic connections.

Synaptic Connections in the Brain

While it is now believed that genes govern the physical alignment of brain cells, synaptic connections between cells are changeable and dynamic. Our genes may predetermine the layout of our mental homes, but experience adds the doors and windows, changes and organizes the furniture, and furnishes the interior of our mental homes. However, this arrangement, or as one might put it, our "state of mind," is not fixed.

Synaptic connections are continuously formed and severed throughout a lifetime of experiences, creating a massive, dynamic brain network. Today's brain is different from yesterday's. We may therefore claim that, to some extent, our minds are continually evolving because the brain serves as the physical underpinning of the mind.

The frontier of contemporary neuroscience is our growing understanding of the synaptic mechanisms that collect, store, and retrieve information across the brain. Evolutionary psychology's notion of innate determinism is now less significant than the influence of learning via experience. In other words, neither the doors nor the furniture in our mental home is propped open or fastened to the floor with bolts. To maintain a decent character and a properly integrated mental household, we must carefully regulate and attend to it.

Example of a Synaptic Connection

Synapses are a component of the circuit that links the peripheral nervous system's sensory organs, such as those that detect touch or pain, to the brain. Synapses link brain cells to their counterparts throughout the body, from those cells to the muscles. This is how, for example, the intent to extend our arm results in the arm's muscles moving. Synapses in the brain are also significant; they, for instance, are essential in memory formation.

Many synapses have an axon for the presynaptic component and a dendrite or soma for the postsynaptic component. Additionally, astrocytes communicate with synaptic neurons, reacting to synaptic activity to control neurotransmission. Synaptic adhesion molecules (SAMs), which protrude from each pre- and postsynaptic neuron and cling together where they overlap, stabilize synapses (at least chemical synapses). SAMs may also help create and maintain synapses.

Chemical Synapses − Inside a chemical synapse, electrical events in the presynaptic neuron results in the release of a substance known as a neurotransmitter that binds to receptors found in the plasma membrane of the postsynaptic cell (through activation of voltage−gated calcium channels). The postsynaptic neuron may be excited or inhibited by the neurotransmitter, depending on whether it triggers an electrical reaction or a secondary messenger pathway. According to the neurotransmitter produced, chemical synapses can be categorized as glutamatergic (typically excitatory), GABAergic (often inhibitory), cholinergic (for example, vertebrate neuromuscular junction), and adrenergic (releasing norepinephrine). Chemical synapses can have intricate impacts on the postsynaptic cell because of the complex nature of receptor signal transduction. 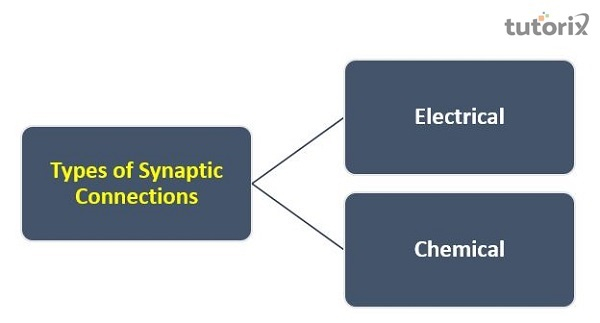 Electrical Synapses − A gap junction connects the membranes of the presynaptic and postsynaptic cells of electrical synapses, allowing an electric current to flow through them, enabling voltage difference in the presynaptic cell to generate voltage difference in the postsynaptic cell. The quick signal transmission from one cell to the next is an electrical synapse's real benefit. Ephaptic coupling, which involves indirect electric fields for communication between neurons, differs from the synaptic coupling.

When the axon of one neuron synapses onto the dendrites of the same neuron, an autapse occurs, which can be either chemical or electrical.

The axon can synapse into the bloodstream or sparsely into the surrounding neural tissue and onto a dendrite, a cell body, another axon, or an axon terminal. The kind of cellular structures acting as the pre-and postsynaptic elements can be used to categorize synapses.

Although various configurations are possible, the great majority of synapses in the human nervous system are traditional axodendritic synapses (an axon synapsing upon a dendrite). Axo-axonic, dendro-dendritic, axo−secretory, somatodendritic, dendro−somatic, and somato-somatic synapses are just a few examples. To give a brief on a few of these −

Axo-axonic synapses are a particular kind of synapse that is created when one neuron projects its axon terminals onto the axon of another neuron. Compared to the other, more well-known forms of synapses, such as axodendritic synapses and axo-somatic synapses, axo-axonic synapses have been discovered and described relatively recently. The axo-axonic synapse does not help to initiate an action potential in the postsynaptic neuron. Instead, it influences the likelihood that neurotransmitters will be released because of any action potential that travels through the postsynaptic neuron's axon. Therefore, it seems crucial for the brain's ability to perform a certain neural calculation.

Axo−axonic synapses can cause the postsynaptic neuron to exhibit either inhibitory or excitatory effects. Axo-axonic synapses are known for their inhibitory effects on motoneurons in the spinal-somatic reflex arc, which is a classic illustration of their function. Presynaptic inhibition is the name given to this phenomenon.

Dendrites of two distinct neurons can interact at dendrodendritic synapses. This contrasts with the more typical axodendritic synapse (chemical synapse), where signals are sent by the axon and received by the dendrite. When employing a chemical synapse to trigger synapses, dendrodendritic and axodendritic synapses function similarly. Neurotransmitters can be released in response to an inbound action potential to help the signal reach the postsynaptic cell. The fact that whichever dendrite can send a signal to that synapse provides proof that these connections are bi−directional. One dendrite typically exhibits inhibitory effects, whereas the other exhibits excitatory effects. Similar to axodendritic synapses, the actual signaling mechanism uses Na+ and Ca2+ pumps.

It is commonly acknowledged that the synapse contributes to memory formation. Because of the signaling mechanisms of the receptors, which are activated by neurotransmitters throughout the synaptic cleft, the link between the two neurons is enhanced when both neurons are engaged simultaneously. The capacity of two interconnected brain circuits is thought to influence how well memories are stored. Long-term potentiation is the term used to describe this process of synapse strengthening.

The plasticity of synapses in the presynaptic cell can be regulated by changing neurotransmitter release. It is possible to control the postsynaptic cell by changing the functionality and amount of its receptors. The best−studied forms of plasticity at excitatory synapses are long-term potentiation (LTP) and long−term depression (LTD), which are mediated by the N−methyl−d−aspartic acid receptor (NMDA) and are dependent on calcium entry into the postsynaptic cell.

The transfer of nerve signals from one neuron to the next requires synapses. Synapses are how neurons, specialized in conveying messages to specific target cells, accomplish this. The target (postsynaptic) cell's plasma membrane and the signal−passing neuron's plasma membrane are nearby at a synapse. The large ensembles of the cellular mechanism that connect both membranes and carry out the signaling process are present at both the presynaptic and postsynaptic locations.