Silverlight is a browser plug-in, designed for building rich internet applications; applications that run in the browser like normal web applications, but which try to advance the user interface beyond where HTML can go. For example,

From a developer's perspective, the most interesting feature of Silverlight is that it brings the .NET Framework programming model to the client side of your web applications. 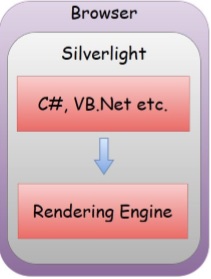 The platforms and browsers supported by Silverlight are −