Human behavior is complex, and an individual's personality is a reflection of this complexion. Many methods, used in assessing personality, are based on conscious behavior. The covert or unconscious behavior is not so insignificant; rather, it is more significant than the former, as Freud believes that our conscious behavior is only one-tenth of the total behavior. Therefore, there should be some other techniques that not only emphasize the observable part of the human personality, but can also reveal his inner or private world and go deeper into the unconscious behavior of an individual to dig out the repressed feelings, wishes, desires, fears, hopes, and ambitions, etc. Projective techniques are devised to accept the challenge. They aim to evaluate a person's personality as a whole, not in bits and pieces. The concept of projection serves as the foundation for projective techniques. 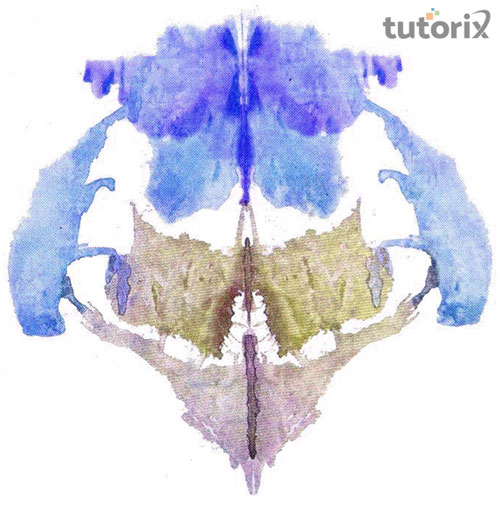 In these techniques, the participant is given rather vague and unstructured stimuli (such as vague visuals, ink blots, incomplete words, etc.) and allowed to structure them. By doing this, he unintentionally projects his hopes, fears, repressed wishes, etc., showing his inner or secret world and providing an accurate indication of how his entire personality may be characterized.

What is Rorschach Inkblot Test?

Designed by Hermann Rorschach, Rorschach Inkblot Test is used to figure out a person's unconscious thoughts, emotions, or aspirations. It was developed in the 1920s originally to diagnose people with Schizophrenia, but later, psychologists also started using it for examining the personality traits and emotional functioning.

The concept of this test marks back to their childhood days of Hermann. He found games like Klecksography very fascinating, which contain activities like creating inkblots and making shaping stories about them. He relished the game to the extent that he started gaining fame by the name "Kleck's," which means "inkblot" in his circle. His fascination continued into adulthood. During his work days in a psychiatric hospital, he paid attention to different Schizophrenic patients responding differently to blots than patients diagnosed with other conditions. He initiated the research that if the bolts could help in assessing different mental disorders. After combining his favourite game as a child and his studies as an adult, Rorschach developed a systematic tool using inkblots.

What is it used for?

Initially, the use of RIBT was to diagnose people who have Schizophrenia, but through the years, it has gained a sufficient amount of popularity in the psychotherapy and counselling fields. It is not just limited to Schizophrenia but also helps assess many psychological disorders, thinking patterns, personality traits, etc.

There are many other factors that the person interprets the responses −

Interpretation of a Rorschach response is a complicated method. It is not limited to the formal scores of a subject; it also involves the analysis of the overall behavior of the subject and other factors. The psychologist will start the process by evaluating various factors like the test's validity, the number of resources made available to the subject, and the requirements made by the subject during the entire course. The next step would include analyzing cognitive functions, emotional abilities, and the capability to extract ideas from the subject. The psychologist may also evaluate their self-concept, attitudes, and relationships with others. Apart from precise evaluation, the interpretation also involves evaluating constant or uncommon themes, different patterns across the scores, and quirky perceptions. Studies suggest that a fast response may signify comfort in facing social situations and calmness in maintaining relationships.

Why is RIBT an uncommon personality test?

Despite its widespread fame, many critiques pointed out several factors in the Rorschach Inkblot Test. There were controversial mentions about the scoring and diagnostic value of the test.

The Rorschach Inkblot test is a scientific tool used to evaluate different personality traits and psychological conditions. It works by asking the subjects to give their opinions about images that seem trivial and insignificant, but are designed in a unique way that can reveal their inner thoughts and feelings. Despite facing an ample amount of criticism Rorschach test is still widely used for the different operations. Different psychologists use it in schools, hospitals, and counselling centers for various reasons like identifying Schizophrenia, revealing an individual's buried emotions, and figuring out different personality traits.