A mnemonic device is a method used to memorize data by gradually transforming it into a form that is more readily retained by the mind. These aids provide a cognitive curing mechanism for retrieving forgotten information. The first mnemonic is a basic method with which most people are acquainted. Many pupils successfully memorized the titles of the Great Lakes by associating them with the acronym HOMES. Colors of something like the spectrum may also be remembered with the help of the acronym ROY G BIV. Most notably, and this is an example of a cued order for the colors of the spectrum. Single characters have weak retrieval signals, which is the main drawback of this small device. 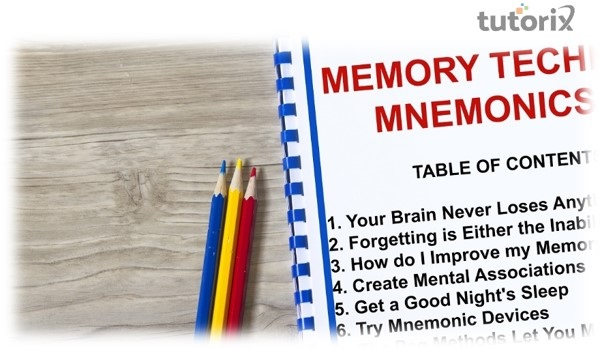 What is Mnemonic Device?

This graphical mnemonic strategy is called the "memory trip" technique. Imagine yourself navigating comfortable surroundings to practice the technique of loci. A visual mnemonic is useful for remembering things like maps, addresses, and grocery lists.

By chunking, one can learn smaller chunks of knowledge independently before reassembling them into a larger whole. One can recall longer lists of information, such as telephone numbers or shopping lists, by breaking them down into smaller bits of information. If one wants to remember more than the typical seven items in one's short attention span, try using the technique of stacking.

Use this technique, often called name mnemonics, to remember a series of words or phrases by combining the first letters of each word or line. Colors of the rainbow and the order of processes in arithmetic (PEMDAS) are memorized using this method.

To aid with memory, this tool employs acoustic coding and audio stimulation. The jump year poem, widely known as "Thirty Days Hath September," is an instance of a mnemonic device that makes use of rhyme to help remember important information.

Music mnemonics are another technique for memorization that relies on aural cues, and the data set to music is an excellent memory aid. "The ABC Dance," for instance, employs the tune of "Twinkle, Twinkle, Little Star" to help children learn the letters.

One simple method to aid with memory is via the use of associations. The premise is that making connections between new knowledge and things one understands helps one retain that knowledge. To recall the name of a new colleague called Todd, one may picture him with spectacles, a mustache, and pencils under his ear, much like one's uncle Todd. Imagine a similar scenario where one needs to recall that Isaac Newton developed mathematics and established the laws of gravitation. In that instance, picture one is buddy Isaac practicing arithmetic while munching on. One is more likely to recall an unusual or humorous incident.

Studies conducted in 2019 confirm the effectiveness of mnemonics as a learning tool. These learning tools leverage a person's innate capacity to memorize data. Some benefits of employing mnemonic devices are as follows −

Studies of mnemonics' efficacy in the classroom have shown their usefulness. Participants of varying ages who used mnemonic approaches to acquire a new language scored better than those in the normal control, who relied on contextual learning and free−learning strategies. Mnemonics were especially helpful for populations with poor or impaired long−term memory, such as the elderly. One hundred twelve persons aged 60 and over who were included in a mnemonic retraining study were tracked by researchers for five years following the first trial. Before mnemonic training, immediately after that, and at the 5−year follow−up, participants' delayed recollection of a word list was evaluated. There was no discernible improvement in word recall between pre-and post-training assessments. However, gains in efficiency immediately after training and mnemonic usage predicted performance during follow−up based on scores achieved before training. Participants who reported applying the mnemonic showed the greatest improvement in performance after receiving instruction. The results imply that mnemonic training benefits certain older persons over the long term, especially those who maintain to use of the mnemonic. However, a survey of medical students found that only around 20% of students regularly employed mnemonic acronyms.

Regarding humans, the medial gyrus and hippocampus−the regions responsible for integrating new memories into existing ones−are especially vulnerable to the effects of time. Episodic memory is where one saves data about things or characteristics that have a place and time associated with them. The effectiveness of mnemonics may vary with age and the health of the medial temporal cortex and the hippocampus since they are more effective for recalling geographical or physical data than more abstract forms. In addition, one recent research suggests that older persons, in comparison to younger ones, have a more widespread loss in their recall of geographical places. Initially, there was little noticeable variation in target identification. Based on the results of the neuropsychological tests, the researchers separated the elderly into two categories− those without cognitive impairment and those with it. When we looked at each age group separately, we found that older people with impairments had a worse time recognizing targets than either younger or older people without impairments. This provides more evidence that mnemonics' efficacy varies across age categories.

To integrate data in a manner that facilitates effective storage and retrieval, mnemonics included such collection cues and visuals. To remember new knowledge, mnemonics help connect it with something familiar or significant.