The medium access control (MAC) is a sublayer of the data link layer of the open system interconnections (OSI) reference model for data transmission. It is responsible for flow control and multiplexing for transmission medium. It controls the transmission of data packets via remotely shared channels. It sends data over the network interface card.

MAC Layer in the OSI Model

The Open System Interconnections (OSI) model is a layered networking framework that conceptualizes how communications should be done between heterogeneous systems. The data link layer is the second lowest layer. It is divided into two sublayers −

The following diagram depicts the position of the MAC layer − 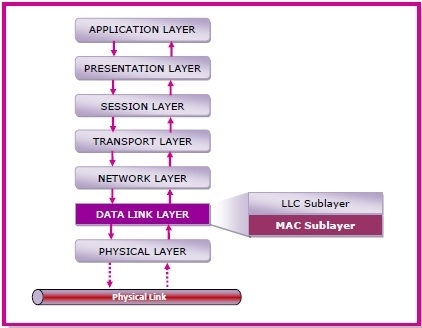 MAC address or media access control address is a unique identifier allotted to a network interface controller (NIC) of a device. It is used as a network address for data transmission within a network segment like Ethernet, Wi-Fi, and Bluetooth.

MAC address is assigned to a network adapter at the time of manufacturing. It is hardwired or hard-coded in the network interface card (NIC). A MAC address comprises of six groups of two hexadecimal digits, separated by hyphens, colons, or no separators. An example of a MAC address is 00:0A:89:5B:F0:11.