What are Logical Link Control (LLC) and Medium Access Control(MAC)?

OSI reference model: It stands as Open Systems Interconnection. OSI is a 7 layer architecture which contains 7 layers. Each layer has its own specific functionality. All these 7 layers in the OSI model are used to transmit data.

Datalink layer contains two sub layers which are as follows −

Given below is the diagram of an Open Systems Interconnection (OSI) model with LLC and MAC sub layers: 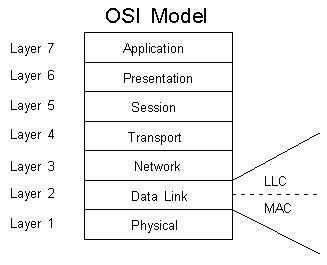 The main functionality of the LLC layer is that it multiplexes the protocols over the MAC layer while sending and de-multiplex the protocols while receiving. This layer controls the flow control.

The error-checking of the data link layer is performed by LLC. It can also track the acknowledgments.

While transmitting data, if LLC detects any frame loss, immediately it sends back to the source to transmit over again. The LLC layer comes above the MAC layer and acts as an interface between the upper layers and the MAC layer.

MAC address is defined and the Media Access Control address. It is a unique address that is allocated to the NIC of the device. It is used as an address to transmit data within ethernet or Wi-Fi.

This layer acts as an interface between the physical layer and the LLC layer in the OSI model. The main responsibility of the MAC layer is that it encapsulates the frames during transmission so that, whether they are suitable.

The MAC layer identifies and verifies the address of source stations and destinations. MAC layer performs multiple access resolution when there are more data frames.

MAC layer coordinates with the physical layer to seize a shared channel by using multiple MAC entities to avoid collisions.

Ethernet is an example of a medium that is defined through the MAC sublayer.