IEEE 802.11 standard, popularly known as WiFi, lays down the architecture and specifications of wireless LANs (WLANs). WiFi or WLAN uses high frequency radio waves instead of cables for connecting the devices in LAN. Users connected by WLANs can move around within the area of network coverage.

The 802.11 MAC sublayer provides an abstraction of the physical layer to the logical link control sublayer and upper layers of the OSI network. It is responsible for encapsulating frames and describing frame formats.

The main fields of a frame of wireless LANs as laid down by IEEE 802.11 are − 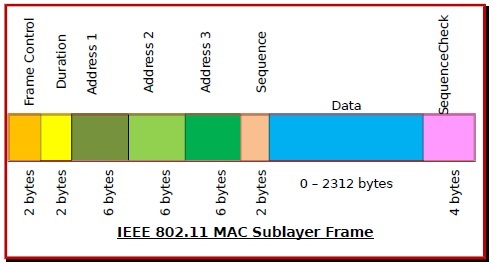 Avoidance of Collisions by 802.11 MAC Sublayer

In wireless systems, the method of collision detection does not work. It uses a protocol called carrier sense multiple access with collision avoidance (CSMA/CA).

The method of CSMA/CA is −