The premise of social management is that people may perform criminal acts without preparation. The idea posits that illegal action's monetary, legal, and social consequences deter individuals from engaging in such conduct. According to Hobbes, this is a normal condition of affairs for humans, in which criminal habit is the most prudent course of action. Hobbes advocates a rules-based system and a state strong enough to sanction some who resort to violence and deception to pursue their vested interests as a means to end this life of violence. For Hobbes, the reasonable choice might be surrendering to political rule to protect one's life and assets. According to Hobbes' choice criminality theory, people commit crimes because they assess their pros and drawbacks.

According to social contract theory, individuals are less likely to do illegal acts because of the influence of their social networks and the values and ideas they were raised with. Therefore, if people internalize moral values and are invested in and connected to their larger society, they will be less likely to engage in antisocial habits. This idea aims to figure out how we can stop criminal habit before it starts in people. It does not consider why people do what they do; instead, it just states that people may do whatever they want, except for the constraints imposed by socialization and learning. According to the idea, all decisions are bound by implied social agreements, commitments, and relationships among individuals based on a Hobbesian understanding of human habit, as shown in Leviathan. Thus, ethics is constructed to establish social order, which entails labeling certain actions as immoral, unlawful, or harmful because of the effects and consequences of such actions.

Social control is essential if we want a more prosperous and peaceful society. It helps people develop as people and helps communities grow. For example, unemployment, movement, and race-based heterogeneity are all more potentially at risk in areas with greater crime levels. The existence or absence of these characteristics impacts the degree of social authority in a specific population, especially regarding the siting of infrastructure. A more tightly regulated society often produces a more ordered society, which often produces more economic and social opportunities for its members.

According to Toby, the "uncommitted teenager" is a prime target for gang indoctrination. When the notion of stakes in compliance was established to understand "candidacy" for this kind of educational experience, it was acknowledged that "gang socialization" was part of the causal, motivating dynamic contributing to delinquency. He thought everyone was open to temptation but that most people would not give in to it because they had too much to gain. Juveniles had less to lose by breaking the rules and were more susceptible to enlisting in gangs. Later iterations of control theory extensively use ideas like "stakes in compliance," which is a natural extension of this idea.

Parents can exert personal control over their children via incentives and penalties, as well as imposing limits on their children that reduce their freedom and, by extension, their delinquent potential. However, kids may be restrained when under direct supervision, either by the expectation of parental condemnation or by forming a moral, inward restraint on conduct. In stark juxtaposition to the current concentration on economic conditions as a form of reoffending drive, the emphasis on the household as a resource of control was prominent at the time. Although he did not discount the role played by motivation, he stated that "some deviant conduct derives from a mix of it to an inadequate and inadequate control of the population." 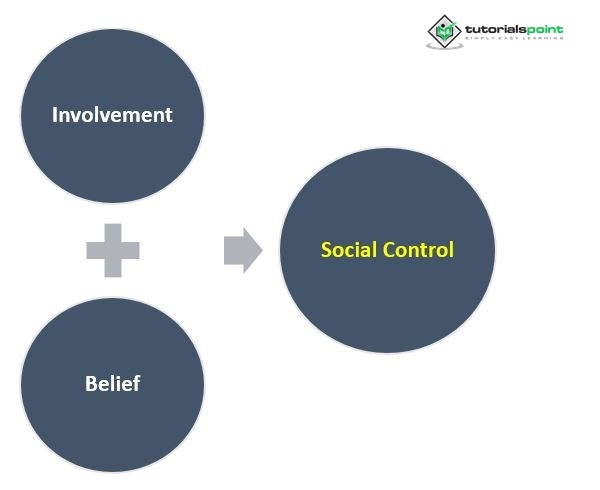 Involvement − Involvement is indicative of taking part in more traditional pursuits. Social control theories assert that people who engage in normal things like walking, playing soccer, completing schoolwork, participating in interests, or chatting with their families are unlikely to engage in criminal activities because of these interests.

Believes − Beliefs' potential to foster criminal habit has long been debated. Some sociologists place a high value on them, whereas others do not give them a second thought, dismissing them as nothing more than words that explain or explain away previous conduct. It is a central tenet of discipline and order to discredit the assumption that perpetrators' ideas motivate their criminal habits. Some ideas serve as a deterrent to criminal habit, whereas others open the door to it. Academics have investigated ideas to comprehend how the ties of commitment, participation, and connection serve to avoid antisocial habits. For example, people who feel that those who violate the law are usually always detected and penalized are more inclined to perform inappropriate acts than those who do not. Furthermore, several others have claimed that such queries elicit emotional rather than rational reactions.

Based on the idea that humans naturally create social attachments, Hirschi's social presence theory attempts to clarify why more and more people avoid illegal habits rather than actively participating in them. As a result of these connections, a tacit agreement is formed in which the community members agree to behave in certain ways to maintain the normal functioning of society as a whole. According to Hirschi, people with deep roots in traditional culture and solid social connections are less inclined to break the law. Those who are well-connected to others are more likely to sacrifice their freedoms for the greater good of society. In contrast, Hirschi believed that people with poor or superficial social relationships were much more prone to break from the normal because they lacked a reliable motivation to stick with the status quo.