Flooding is a non-adaptive routing technique following this simple method: when a data packet arrives at a router, it is sent to all the outgoing links except the one it has arrived on.

For example, let us consider the network in the figure, having six routers that are connected through transmission lines. 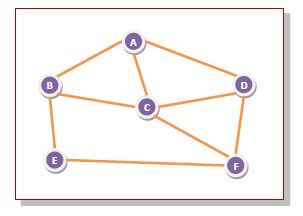 Flooding may be of three types −