Every tape’s have their own Read/Write head

Each TM has its own read-write head, but the state is common for all. The multi tape TM is as follows − 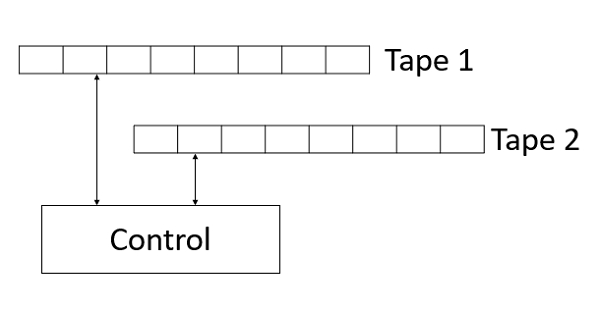 In each step (transitions), TM reads symbols scanned by all heads, depending on those and current state, each head writes, moves R or L, and control-unit enters into a new state.

Actions of heads are independent of each other.

Multiplying two numbers (each represented as a unary string of ones) to get a third would be difficult to do with a simple Turing machine, but is fairly straightforward with a three tape machine.

Start by checking to see whether either number is zero −

Add the number on the second tape to the third tape − 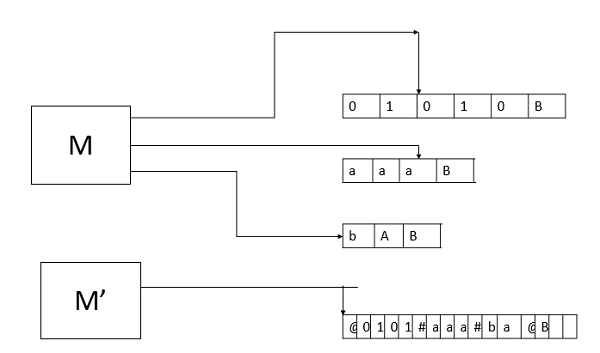 Every multi-tape TM has an equivalent single tape TM

If M has k tapes, M0 simulates the effect of k tapes by storing the same information on its single tape.

Uses a new symbol # as a delimiter to separate the contents of the different tapes (marks the left/the right end of the relevant portions of the tape).

M0 must also keep track of the locations of the heads on each tape.

Write a tape symbol with a dot above it to mark where the head on that tape would be. Dotted symbols are simply new symbols added to the tape alphabet.

If the movement of one T’s tape heads causes M0’s tape head to bump into either or #, then that side of the type must be moved to make room for a new type cell.