In this section we will see the Eulerian and Hamiltonian Graphs. But before diving into that, at first we have to see what are trails in graph. Suppose we have one graph like below − 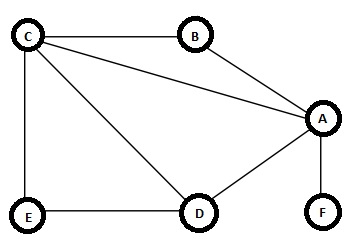 The Eulerian Trail in a graph G(V, E) is a trail, that includes every edge exactly once. If G has closed Eulerian Trail, then that graph is called Eulerian Graph. In other words, we can say that a graph G will be Eulerian graph, if starting from one vertex, we can traverse every edge exactly once and return to the starting vertex. Euler proved that a graph is called the Eulerian graph if and only if the degree of its every vertex is even.

One cycle is called as Hamiltonian cycle if it passes through every vertex of the graph G. There are many different theorems that give sufficient conditions for a graph to be Hamiltonian. However, the problem determining if an arbitrary graph is Hamiltonian is NPComplete problem.