We will now see the various steps for getting the Docker container for Node.js up and running.

Step 1 − The first step is to pull the image from Docker Hub. When you log into Docker Hub, you will be able to search and see the image for Node.js as shown below. Just type in Node in the search box and click on the node (official) link which comes up in the search results. 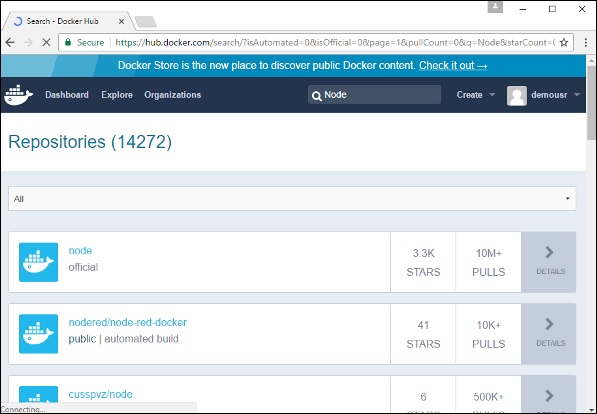 Step 2 − You will see that the Docker pull command for node in the details of the repository in Docker Hub. 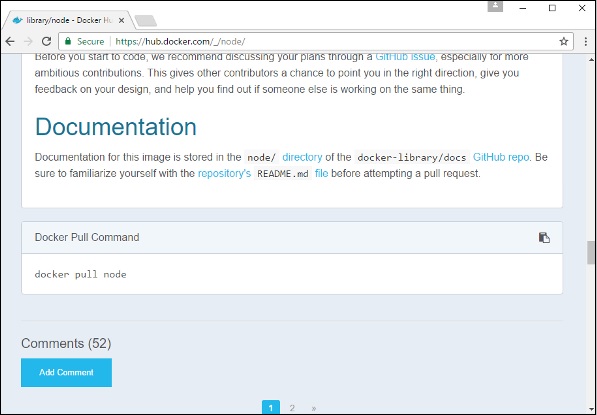 Step 3 − On the Docker Host, use the Docker pull command as shown above to download the latest node image from Docker Hub.

Once the pull is complete, we can then proceed with the next step.

Step 4 − On the Docker Host, let’s use the vim editor and create one Node.js example file. In this file, we will add a simple command to display “HelloWorld” to the command prompt.

In the Node.js file, let’s add the following statement −

This will output the “Hello World” phrase when we run it through Node.js.

Ensure that you save the file and then proceed to the next step.

Step 5 − To run our Node.js script using the Node Docker container, we need to execute the following statement −

We will then get the following output. And from the output, we can clearly see that the Node container ran as a container and executed the HelloWorld.js script.