There are a few techniques which have paved the basic path to digital communication processes. For the signals to get digitized, we have the sampling and quantizing techniques.

For them to be represented mathematically, we have LPC and digital multiplexing techniques. These digital modulation techniques are further discussed.

Linear prediction is based on the idea that the current sample is based on the linear combination of past samples. The analysis estimates the values of a discrete-time signal as a linear function of the previous samples.

The spectral envelope is represented in a compressed form, using the information of the linear predictive model. This can be mathematically represented as −

For LPC, the predictor co-efficient values are determined by minimizing the sum of squared differences (over a finite interval) between the actual speech samples and the linearly predicted ones.

This is a very useful method for encoding speech at a low bit rate. The LPC method is very close to the Fast Fourier Transform (FFT) method.

The following figures represent MUX and DEMUX. Their primary use is in the field of communications.

There are mainly two types of multiplexers, namely analog and digital. They are further divided into FDM, WDM, and TDM. The following figure gives a detailed idea on this classification. 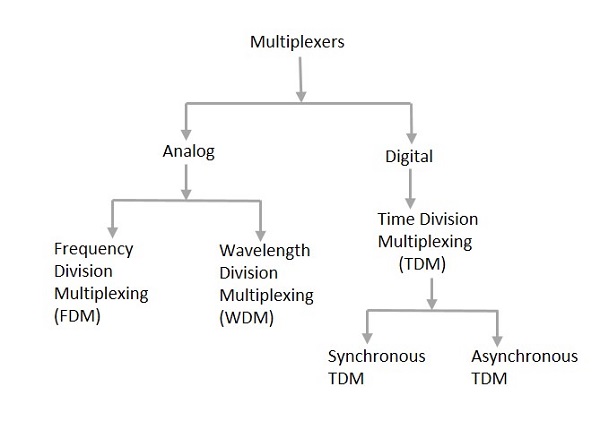 Actually, there are many types of multiplexing techniques. Of them all, we have the main types with general classification, mentioned in the above figure.

The analog multiplexing techniques involve signals which are analog in nature. The analog signals are multiplexed according to their frequency (FDM) or wavelength (WDM).

Example − A traditional television transmitter, which sends a number of channels through a single cable, uses FDM.

Wavelength Division multiplexing is an analog technique, in which many data streams of different wavelengths are transmitted in the light spectrum. If the wavelength increases, the frequency of the signal decreases. A prism which can turn different wavelengths into a single line, can be used at the output of MUX and input of DEMUX.

In TDM, the time frame is divided into slots. This technique is used to transmit a signal over a single communication channel, by allotting one slot for each message.

Of all the types of TDM, the main ones are Synchronous and Asynchronous TDM.

In this technique, the sampling rate is common to all signals and hence the same clock input is given. The MUX allocates the same slot to each device at all times.

In Asynchronous TDM, the sampling rate is different for each of the signals and a common clock is not required. If the allotted device, for a time-slot, transmits nothing and sits idle, then that slot is allotted to another device, unlike synchronous. This type of TDM is used in Asynchronous transfer mode networks.

For any communication system to be reliable, it should transmit and receive the signals effectively, without any loss. A PCM wave, after transmitting through a channel, gets distorted due to the noise introduced by the channel.

The regenerative pulse compared with the original and received pulse, will be as shown in the following figure.

For a better reproduction of the signal, a circuit called as regenerative repeater is employed in the path before the receiver. This helps in restoring the signals from the losses occurred. Following is the diagrammatical representation. 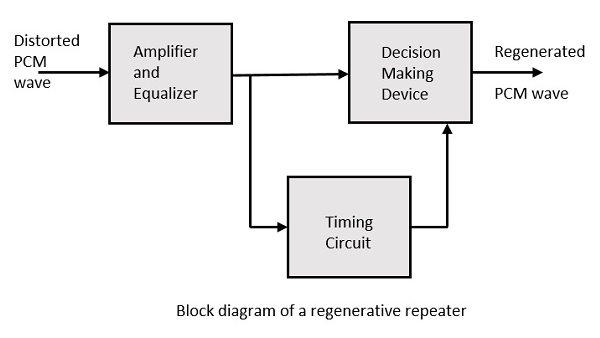 This consists of an equalizer along with an amplifier, a timing circuit, and a decision making device. Their working of each of the components is detailed as follows.

The channel produces amplitude and phase distortions to the signals. This is due to the transmission characteristics of the channel. The Equalizer circuit compensates these losses by shaping the received pulses.

To obtain a quality output, the sampling of the pulses should be done where the signal to noise ratio (SNR) is maximum. To achieve this perfect sampling, a periodic pulse train has to be derived from the received pulses, which is done by the timing circuit.

Hence, the timing circuit, allots the timing interval for sampling at high SNR, through the received pulses.

These are few of the techniques used in digital communications. There are other important techniques to be learned, called as data encoding techniques. Let us learn about them in the subsequent chapters, after taking a look at the line codes.