In Differential Phase Shift Keying (DPSK) the phase of the modulated signal is shifted relative to the previous signal element. No reference signal is considered here. The signal phase follows the high or low state of the previous element. This DPSK technique doesn’t need a reference oscillator.

The following figure represents the model waveform of DPSK.

DPSK is a technique of BPSK, in which there is no reference phase signal. Here, the transmitted signal itself can be used as a reference signal. Following is the diagram of DPSK Modulator. 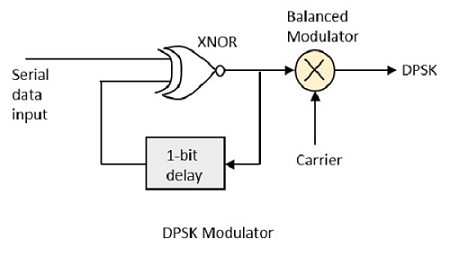 From the above figure, it is evident that the balance modulator is given the DPSK signal along with 1-bit delay input. That signal is made to confine to lower frequencies with the help of LPF. Then it is passed to a shaper circuit, which is a comparator or a Schmitt trigger circuit, to recover the original binary data as the output.