The logic for solving the problem is as follows −

Step 1 − First, we need to find the midpoint of the string.

Step 2 − We will make the first 0 to X or 1 to Y and then move R/W head to the right until the last character is found.

Step 4 − Now, we will move to the left and stop just before the first character which we make as X or Y at the beginning

Step 5 − Make the second character as X or Y depending on the value and similarly, we move to the right for the same.

Step 6 − After doing this continuously, all the 0s will be X and all the 1s will be Y and the R/W head will be at the middle of the string.

Step 7 − Now we will move the R//W head to the left of the string and convert X to 0 and Y to 1 continuously until we reach the beginning of the string.

Step 10 − After the first character is converted, move the read-write head all the way to the right until we encounter the first X or Y (the second half of the string) and make it blank.

Step 11 − Then move all the way back to the character next to X or Y and then repeat the same.

Step 12 − After continuously doing the above step, if only Xs and Ys are left (only the first half portion is left, the second half will be blank) then the string will be accepted. Otherwise, it will be rejected.

Here, we have made the same using ten states where Q0 is the initial state and Q9 is the final.

The Turing Machine is as follows − 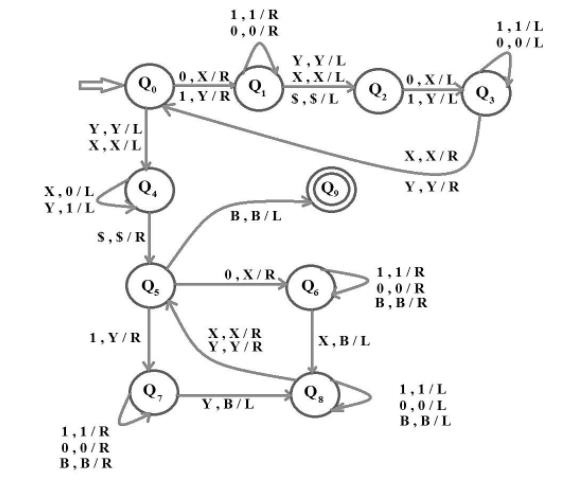