Until the 1960s or 1970s, behaviorism and other psychology schools were based on the notion that individuals are machines or mechanisms. In actuality, behaviorism claims that the study of psychology should focus on observed behavior. Any mention of cognitive processes was discounted since, according to Watson and later Skinner, they were covert rather than overt. Of course, excluding cognition from the study of psychology overlooked a crucial aspect of what makes us unique among animals and distinguished us from other species. Thankfully, research by George Miller, Albert Ellis, and Aaron Beck showed how crucial cognitive skills are for comprehending thoughts, behaviors, and emotions. Cognitive theorists contend that a variety of cognitive issues can cause abnormal functioning. Some people may develop unsettling and false presumptions and attitudes. They believe how we think plays a major role in how we function.

Cognitive theorists contend that illogical thought processes are another cause of deviant behavior. For instance, Aaron Beck has discovered that some people think illogically and constantly come to self-defeating conclusions. He has noted certain irrational cognitive patterns that are frequently present in depressive disorders, such as overgeneralization—the act of forming generalized unfavorable inferences from a small number of unimportant events. During a history lesson, one despondent student struggled to recall the date of Columbus' third voyage to America. She made too many generalizations and spent the rest of the day depressed about her extensive ignorance.

Once information is sensed, processed, and evaluated, the information is transmitted to the brain via a neuronal impulse after it has been gathered or sensed. It is processed and interpreted once it enters the brain. When evaluating information about others, the cognitive process of perception−which entails giving meaning to purely sensory data−comes into play. In order to categorize or group persons, we employ the information that was just identified. We have a schema−a collection of assumptions and expectations about a group of people−for each category that is presumptively true of all group members and is based on experience. Our schemas can sometimes be false and lead to cognitive distortions, which in turn lead to abnormal behavior.

Talking about the fascinating social psychology subject of attribution theory, which proposes that people are driven to explain their own and other people's behavior by attributing causes of that behavior to personal reasons or dispositional factors that are inherent to the person or linked to a trait they possess, or situational factors that are related to something outside the person. The attributions we make can mislead us, just like schemas can. How so? When we instinctively assume a dispositional reason for another person's conduct and disregard contextual considerations, we commit the fundamental attribution fallacy. This leads to abnormal behavior.

Some common Types of Cognitive Distortion 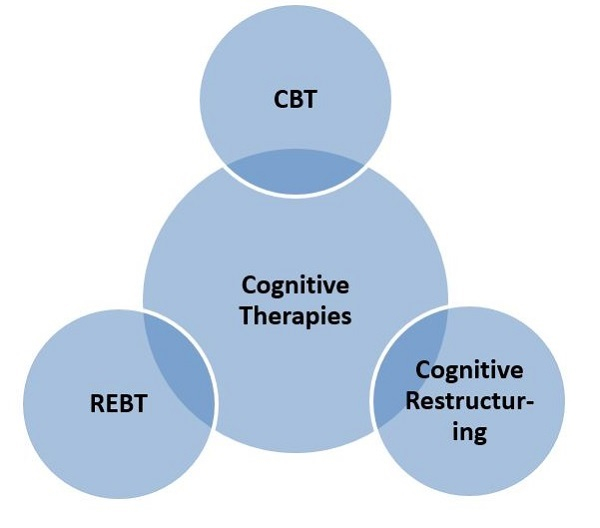 CBT (Cognitive Behavioral Therapy) − Like behaviorism, CBT emphasizes the present rather than the past, but it also holds that humans interact with the world in ways other than simple, automatic responses to environmental cues. People examine the environment and those in it, draw conclusions and inferences* based on those conclusions or cognitions, and then choose how to react. CBT is an action therapy since it also assumes that disorders result from illogical, irrational cognitions and that altering thought patterns to more reasonable, logical ones will reduce the disorder's symptoms.

REBT (Rational Emotive Behavioral Therapy) − In REBT, irrational ideas are actively challenged, and maladaptive thought processes are recognized and altered. Albert Ellis developed REBT on the premise that every person has a distinct set of fundamental beliefs about themselves and the world that shape their behavior, response to events, and view of the world.

Cognitive restructuring − It is also known as rational restructuring, which involves replacing unhelpful cognitions with helpful ones. The client must be aware of the unpleasant ideas, when they happen, and how they affect them to achieve this. After that, assist the client in changing these thoughts to more sensible ones. It is a straightforward approach, but it is a crucial one.

The attractiveness of the cognitive model is fairly widespread. In contrast to a vast number of cognitive-behavioral clinicians, many cognitive doctors concentrate solely on their clients' interpretations, attitudes, assumptions, and other cognitive processes. Approximately 31% of clinical psychologists in practice today classify their methodology as cognitive. The cognitive model is well−liked for a number of reasons. First, it focuses on a process unique to humans− thought. Because of this, many theorists from other fields are drawn to a theory that holds that thought is the root cause of both normal and aberrant behavior.

However, the cognitive paradigm is not without flaws. First, although altered cognitive processes are present in various abnormalities, their exact function is still unknown. Psychologically unstable individuals' cognitions may be more of an effect than a cause of their problems. Second, although many people benefit from cognitive and cognitive−behavioral therapies, not everyone benefits.