Caching is a technique of storing frequently used data/information in memory, so that, when the same data/information is needed next time, it could be directly retrieved from the memory instead of being generated by the application.

Caching is extremely important for performance boosting in ASP.NET, as the pages and controls are dynamically generated here. It is especially important for data related transactions, as these are expensive in terms of response time.

Caching places frequently used data in quickly accessed media such as the random access memory of the computer. The ASP.NET runtime includes a key-value map of CLR objects called cache. This resides with the application and is available via the HttpContext and System.Web.UI.Page.

In some respect, caching is similar to storing the state objects. However, the storing information in state objects is deterministic, i.e., you can count on the data being stored there, and caching of data is nondeterministic.

The data will not be available in the following cases:

You can access items in the cache using an indexer and may control the lifetime of objects in the cache and set up links between the cached objects and their physical sources.

In this tutorial, we will consider output caching, data caching, and object caching.

Rendering a page may involve some complex processes such as, database access, rendering complex controls etc. Output caching allows bypassing the round trips to server by caching data in memory. Even the whole page could be cached.

The OutputCache directive is responsible of output caching. It enables output caching and provides certain control over its behaviour.

Put this directive under the page directive. This tells the environment to cache the page for 15 seconds. The following event handler for page load would help in testing that the page was really cached.

The Thread.Sleep() method stops the process thread for the specified time. In this example, the thread is stopped for 10 seconds, so when the page is loaded for first time, it takes 10 seconds. However, next time you refresh the page it does not take any time, as the page is retrieved from the cache without being loaded.

The OutputCache directive has the following attributes, which helps in controlling the behaviour of the output cache:

Let us add a text box and a button to the previous example and add this event handler for the button.

When the program is executed, ASP.NET caches the page on the basis of the name in the text box.

To demonstrate data caching, create a new website and add a new web form on it. Add a SqlDataSource control with the database connection already used in the data access tutorials.

For this example, add a label to the page, which would show the response time for the page.

Apart from the label, the content page is same as in the data access tutorial. Add an event handler for the page load event:

The designed page should look as shown: 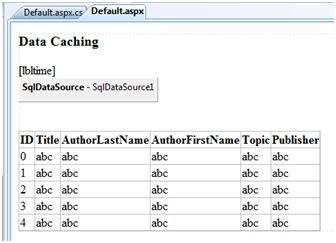 When you execute the page for the first time, nothing different happens, the label shows that, each time you refresh the page, the page is reloaded and the time shown on the label changes.

Next, set the EnableCaching attribute of the data source control to be 'true' and set the Cacheduration attribute to '60'. It will implement caching and the cache will expire every 60 seconds.

The timestamp changes with every refresh, but if you change the data in the table within these 60 seconds, it is not shown before the cache expires.

Object caching provides more flexibility than other cache techniques. You can use object caching to place any object in the cache. The object can be of any type - a data type, a web control, a class, a dataset object, etc. The item is added to the cache simply by assigning a new key name, shown as follows Like:

ASP.NET also provides the Insert() method for inserting an object to the cache. This method has four overloaded versions. Let us see them:

Sliding expiration is used to remove an item from the cache when it is not used for the specified time span. The following code snippet stores an item with a sliding expiration of 10 minutes with no dependencies.

Create a page with just a button and a label. Write the following code in the page load event:

When the page is loaded for the first time, it says:

If you click on the button again within 30 seconds, the page is posted back but the label control gets its information from the cache as shown: