Aptitude is the special skills of a person in a certain activity or area. Freeman defined aptitude as "a combination of characteristics indicative of an individual's capacity to acquire (with training) some specific knowledge skill, or a set of organized responses, such as the ability to speak a language, to become a musician, to do a mechanical work." The person's ability to pick up new knowledge or skills following training is determined by a mixture of traits and environment. Hence, aptitude is neither entirely genetic nor environmental. Certain aspects may be inborn, like playing musical instruments or precision in watchmaking, or other such skill sets can be improved through practice and training. People with the same intelligence may differ in their aptitude for different aspects.

Achievement exams are extensively utilized at primary and secondary levels and serve an important role in the educational program. Achievement tests are designed to evaluate a student's learning after completing a specified course of study. Two of the most popular accomplishment tests used in schools are teacher-made and standardized achievement exams. Validity is established mostly by content-related evidence in such tests. On the other hand, aptitude tests try to assess a student's potential learning ability rather than how much she or he has previously mastered. Aptitude tests, unlike achievement tests, evaluate a wide range of experiences gained in various methods.

Aptitude can be measured from various tests. Some of them are mentioned here in brief:

The Armed Services Vocational Battery (ASVAB) has been designed to screen and recruit personnel and place them in different jobs and training programs in the U.S. Army. The current version of test comprises:

Eight of the ten subtests (Numerical Operations and Coding Speed) are power tests, while the other two (Numerical Operations and Coding Speed) are speed tests. Composite scores are used to determine the examinee's placement, and the examinee's subtest scores are combined to produce composite scores. They are based on empirical evidence and are updated regularly. As a result, although the Armed Services previously relied on seven composite scores, new ones can be produced in response to the changing needs of modern recruiters. Also available in a digital format, the ASVAB has a moderate to a high level of reliability and validity. 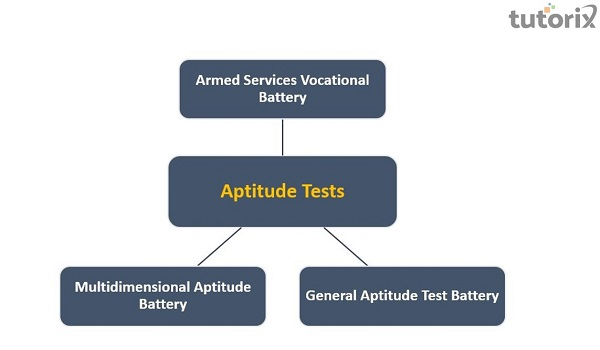 The General Aptitude Test Battery (GATB) is an effective multiple-aptitude test battery. It is used to predict job performances in about 100 specific occupations. The test consists of twelve tests, which includes eight paper-and-pencil tests and four apparatus measures. It yields nine factors as:

From these nine-factor scores, three broad components can be derived as:

In different vocations, these three criteria are involved in varying quantities. Job performance may be anticipated by looking at the pattern of the three general components (Hunter, 1994). Comparing an examinee's score with Occupational Aptitude Patterns is another technique to use the GATB (OAPs) technique. Occupational Aptitude Patterns have been concluded from many employees’ the test results.

Jackson created the Multidimensional Aptitude Battery (MAB). This is a paper-and-pencil version of the Wechsler Adult Intelligence Scale-Revised (WAIS-R), which is used to assess the same abilities. It is a group exercise. It comprises of ten subtests, five verbal scales, and five performance scales, resulting in Verbal, Performance, and Full-Scale IQ. Except for one, all the subtests are named after the WAIS-R.

MAB's Spatial subtest has replaced WAIS-Block R's Design subtest. The things are unique, and they are presented in a multiple-choice manner. Unlike the WAIS-R, which has no time limit on the verbal subtests save Arithmetic, the MAB verbal subtests have components of both power and speed. The items in each of the subtests are ordered in order of increasing difficulty, with the easier items at the beginning and the more difficult items towards the end. Each subtest must be completed within seven minutes.

Both teenagers and adults can use MAB. The test, however, is not appropriate for people with low IQ, cognitively unstable people, or mentally ill people. The MAB subtests' raw scores are transformed into scaled scores. The scaled scores are then used to calculate the IQ deviation. The MAB is thought to be of high psychometric quality. Internal consistency, test-retest reliability, and construct validity have all been reported in research investigations. The MAB is utilized in personnel selection and career counseling.

Aptitude is a measure of one's ability to think and learn. It is often used as a predictor of success in various fields, including academics, business, and the military. Aptitude tests are used to identify individuals who have the potential to succeed in a particular field or area of study. While aptitude tests alone cannot predict success, they can give individuals an indication of their potential. Aptitude tests are one tool that can be used to make decisions about education, career, and other opportunities.