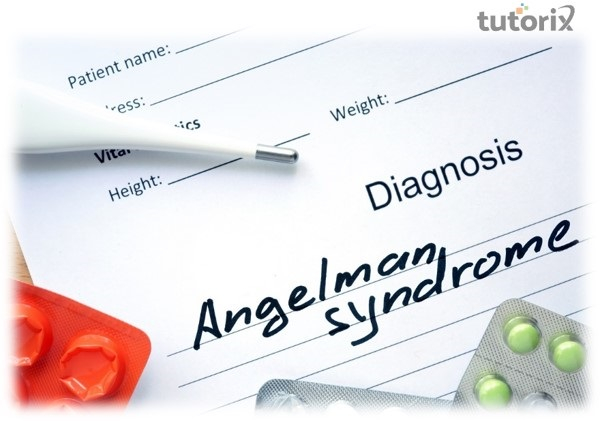 What is Angelman Syndrome?

Angelman syndrome is a genetic condition mainly characterized by developmental delay and severe learning disabilities. Children with this condition show marked intellectual disability, speech and balance difficulties (ataxia), delayed development, and occasionally seizures. They may also have microcephaly, a congenital disability wherein a baby's head is smaller than babies of the same sex and age. Such babies often have smaller brains that may not develop properly. They may also face difficulty swallowing and feeding, disturbance in sleep, hyperactivity, hypopigmentation, scoliosis (sideways curvature of the spine), and constipation. They have a happy demeanor and often have uncontrollable and unprovoked episodes of laughter; This is also why this condition is sometimes referred to as happy puppet syndrome.

The Angelman syndrome's unusual symptoms are typically not present at birth, and the condition is typically diagnosed between the ages of 1 and 4 years. There is a factor of individuality with Angelman syndrome. Every child may show the same symptoms; For example, some may have seizures while others may not. While some may have limited speech, the majority may not be capable of speaking, sometimes only learning a few words. Many gradually pick up other forms of communication, such as gestures. Children may also have sufficient receptive language skills to comprehend basic language communication. Children also experience delays in reaching developmental milestones, which get reflected in developmental delays. 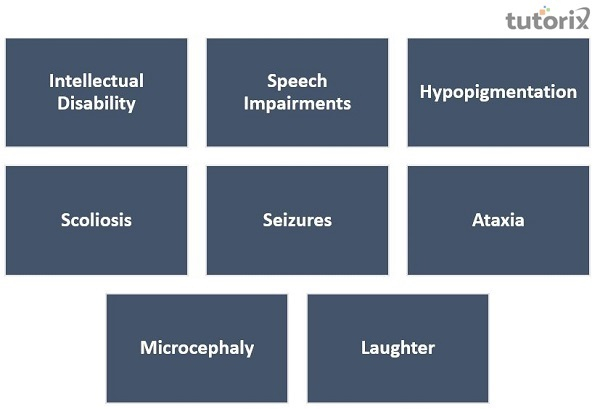 A typical early indication in most children with Angelman syndrome is movement or balance disorders, including jerky movements caused by an inability to coordinate voluntary movements. When walking or feeling joyful, children with Angelman syndrome may raise their arms with their wrists and elbows bent. Increased muscular tone (hypertonia) in the arms and legs, decreased muscle tone (hypotonia) in the trunk, and abnormally fast or exaggerated reflex responses (hyperreflexia) are other possible symptoms.

Subtle tremors of the arms and legs are a symptom of Angelman syndrome in certain children. These movement problems may appear early in a baby's life (approximately 6−12 months of age). Motor milestones, like walking, are frequently delayed. Children as young as 2−3 years old may start to walk in mild cases. In more serious cases, walking may be sluggish, stiff, and jerky. Some kids might not be able to walk until they are between 5 and 10 years old. Children with Angelman syndrome do not walk independently in about 10% of instances.

Adults with Angelman syndrome may exhibit facial characteristics that are more pronounced, such as a more accentuated lower jaw (mandibular prognathism). Some people may experience aberrant corneal protrusion (keratoconus). As people age, their mobility may decline, and their joints may stiffen. Adults and older children may be more prone to obesity.

Angelman syndrome is characterized by several traits brought on by the dysfunction of the UBE3A gene. The UBE3A gene typically comes in two copies, one from each parent. Both copies of this gene are active in most of the body's tissues. However, only the copy inherited from a person's mother (the maternal copy) is active in nerve cells (neurons) in the brain and spinal cord (the central nervous system). Genomic imprinting is the cause of this parent-specific gene activation. An individual will not have any active copies of the UBE3A gene in most brain regions if the maternal copy is deleted due to a chromosomal alteration or a gene variant (sometimes referred to as a mutation). 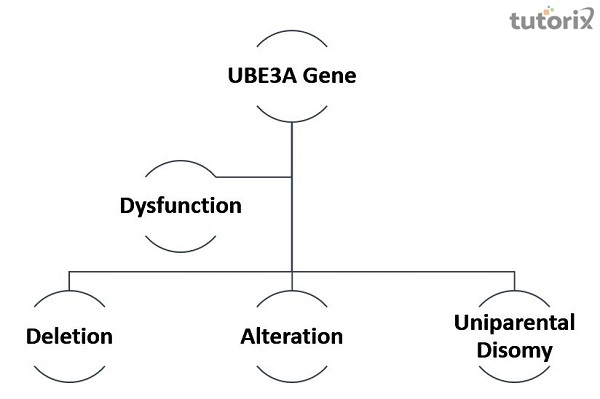 In between 10% and 15% of those who have the condition, the causes are unknown. The condition may be caused by modifications to other genes or chromosomes in certain situations.

People with Angelman syndrome generally have good physical health, and they can receive regular pediatric treatment, including standard childhood vaccines. People who are having seizures can benefit from anti-seizure drugs. Usually, one medicine is sufficient to treat seizures, but occasionally, more than one medication is required. Sedative drugs can be useful on occasion. Modified breastfeeding techniques and tools like customized nipples to help babies with poor sucking abilities can be used to treat feeding difficulties in infants. Upright posture and medications that help food flow through the digestive system can both be used to treat gastroesophageal reflux. Physical therapy and ankle braces/supports can assist in learning to walk. 10% of people can develop scoliosis, which may need to be corrected surgically or with braces.

Both sexes are equally plagued with Angelman syndrome. In the general population, Angelman syndrome is thought to affect 1 in 12,000 to 20,000 individuals. It is challenging to estimate the disorder's prevalence in the general community since many cases may go undetected. Currently, no genetic therapy or curative medication is available to treat Angelman syndrome. However, advances in neuroscience and gene therapy techniques have great potential.