The basic building block for user interface is a View object which is created from the View class and occupies a rectangular area on the screen and is responsible for drawing and event handling. View is the base class for widgets, which are used to create interactive UI components like buttons, text fields, etc.

The ViewGroup is a subclass of View and provides invisible container that hold other Views or other ViewGroups and define their layout properties.

At third level we have different layouts which are subclasses of ViewGroup class and a typical layout defines the visual structure for an Android user interface and can be created either at run time using View/ViewGroup objects or you can declare your layout using simple XML file main_layout.xml which is located in the res/layout folder of your project. 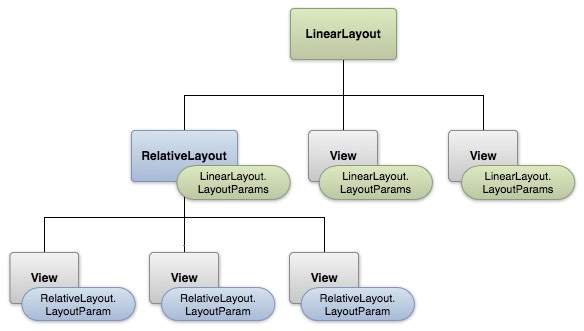 This tutorial is more about creating your GUI based on layouts defined in XML file. A layout may contain any type of widgets such as buttons, labels, textboxes, and so on. Following is a simple example of XML file having LinearLayout −

Once your layout has created, you can load the layout resource from your application code, in your Activity.onCreate() callback implementation as shown below −

There are number of Layouts provided by Android which you will use in almost all the Android applications to provide different view, look and feel.

You can specify width and height with exact measurements but more often, you will use one of these constants to set the width or height −

Gravity attribute plays important role in positioning the view object and it can take one or more (separated by '|') of the following constant values.

A view object may have a unique ID assigned to it which will identify the View uniquely within the tree. The syntax for an ID, inside an XML tag is −

Following is a brief description of @ and + signs −