Akinetopsia: A Disorder of Motion Blindness

Akinetopsia patients report that fluid object motions seem like a broken freeze frame picture. Due to the fluid's appearance of being frozen, like a glacier, patients can struggle to do simple tasks like pouring tea into a cup. Akinetopsia patients are prone to accidents because they frequently bump against objects, become confused about how objects are moved, struggle to cross roadways, and have difficulties operating a vehicle.

Akinetopsia, also referred to as cerebral akinetopsia or motion blindness, is a rare neuropsychological condition in which a patient specifically loses the ability to perceive visual motion while still being able to see stationary objects without any problems. Cortical lesions cause this condition outside of the striate cortex. According to reports, symptomatic akinetopsia may need bilateral cortical damage. Nevertheless, it has been discovered that unilateral lesions can cause global akinetopsia. People who have akinetopsia perceive the world as a collection of still pictures.

Based on the severity of the symptoms and how much the condition affects the patient's quality of life, akinetopsia may be broadly divided into Inobtrusive Akinetopsia and Gross Akinetopsia.

Inconspicuous Akinetopsia − Inconspicuous akinetopsia is characterized by the clinical manifestation of viewing motion like a movie reel or a series of photographs. The stroboscopic vision causes significant distress and annoyance in people with this type of akinetopsia, the most frequent type. Visual trailing (palinopsia), which leaves afterimages between each frame of motion, is also a common symptom of akinetopsia. Prescription medicines, chronic hallucinogen perception disorder, and persistent aura without infarction are inconspicuous akinetopsia's most common contributing factors. 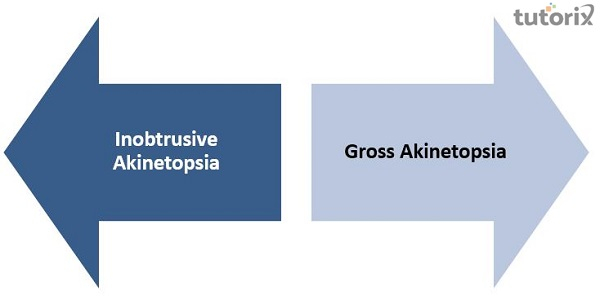 Cerebral akinetopsia symptoms are believed to result from damage to the visual motion pathway, especially the area V5/medial temporal cortex (MT) complex. Transcranial Magnetic Stimulation studies revealed that akinetopsia could be induced selectively and temporarily by magnetic stimulation of area MT/V5 in patients. Individuals with a history of traumatic brain injury (TBI), Alzheimer's disease, and stroke also contribute to akinetopsia.

Akinetopsia, a rare condition, is challenging to treat and rehabilitate patients since qualified professionals are still unfamiliar with the paradoxical clinical manifestations of being able to perceive things yet incapable of motion. There are reportedly no authorized drugs to treat this illness presently.

Based on history alone, suspicion of akinetopsia might be high due to the distinctive range of symptoms. Patients frequently experience specific symptoms, such as feeling like they are in a room with strobe lights or seeing individual "frames on a movie reel" or "stop−action movements." They could gripe that "things disappear whenever they move." Patients may seldom report having significant visual impairment. History may also be used to identify the root cause. The patient should also be questioned about their medical history, any head injuries they may have had, Alzheimer's disease, and recreational drug usage. It might be challenging to treat akinetopsia. Management is based on the root cause. Considerable debate surrounds vestibular and visual rehabilitation, which lacks reliable data.