The application programs which execute under CICS have various logical levels. The first program which receives the control directly is at highest logical level, i.e., Level 1. The Linked program is at the next logical level from the linking program. The XCTL programs run at the same level. It will be clear when we will go through Link and XCTL, later in this module. The following image shows the logical levels − 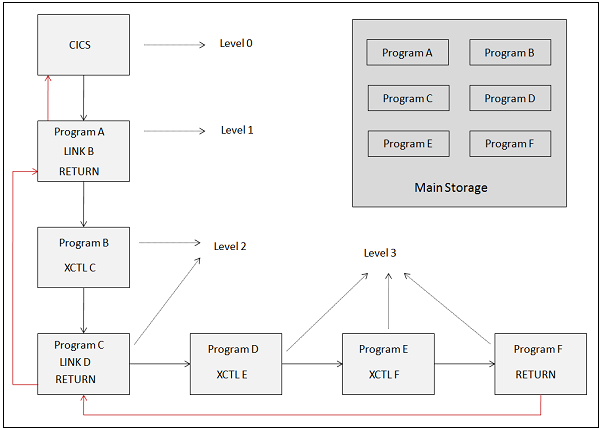 The fundamental explanation of XCTL is as follows −

This command transfers the control to be passed to program 'PROG2' with 100 bytes of data. COMMAREA is an optional parameter and is the name of the area containing the data to be passed or the area to which results are to be returned.

Link command is used to transfer the control to another program at lower level. It expects the control back. A Linked program cannot be pseudo-conversational.

Load command is used to load a program or a table. Following is the syntax of Load command −

The interval control operations are of the following two types −

ASKTIME is used to request for current time and date or timestamp. We then move this value to the working storage variable inside the program. Following is the syntax of ASKTIME command −

FORMATTIME formats the timestamp into the required format based on the options, which can be YYDDD, YYMMDD, or YYDDMM for date. DATESEP indicates the separator for the DATE as does the TIMESEP variable for TIME. Following is the syntax of FORMATTIME command −