Counterproductive Work Behaviors (CWBs) are deliberate acts of carelessness and indifference engaged in by individuals, and are completely unrelated to accidental or unintentional actions. CWBs do not involve acts such as the inability to successfully complete a task, or getting involved in accidents. However, The U.S. Department of Health and Human Services estimates that organizations face losses worth $145 million annually due to accidents.

Although all top organizations provide world-class safety standards for their employees at the workplace, there have been significant increase in accident-related incidents in the recent past. Experts observed that the most accident-prone employees have been typically younger, more distractible, and less socially adjusted to their co-workers and workplace.

Very few employees who face abuse at the hands of their supervisor will directly retaliate or quit the job as they fear being out of a job in today’s testing times of unemployment, but in reality many strike out against their employer by engaging in counterproductive work behaviors. Since employees control many of the organization's resources, these counterproductive employees can abuse supplies and services, working time, production and quality of their output.

In worse cases, counterproductive workplace experiences may fuel the worker to act out through his slackened working speed, indifferent attitude towards feedback and lax productivity. An employee who is not satisfied with the situations he is working in will definitely become less productive.

The way in which the workforce of an organization gets played into informal hierarchies is based on multiple factors like company goals, size of the company, number of resources, and the type of leader. This hierarchy keeps on changing as newer individuals with different job roles and authority keep being introduced to the organization. People quickly realize who the boss is, whom they depend on for valuable information, and who knows all the office gossip. People who don’t fit into this informal organizational model frequently end up displaying counter-productive behavior.

Many individuals use office gossip as a tool of controlling the flow of conversation and extracting information through a mutual information-sharing. People engaging in gossip hope for a 50-50 chance of getting some genuine information back from the listener after they have gossiped enough with him. Gossip creates a hostile environment where people no longer feel comfortable trusting each other with sensitive information. It also is directly responsible for reducing the work efficiency of the person all this gossip goes against. 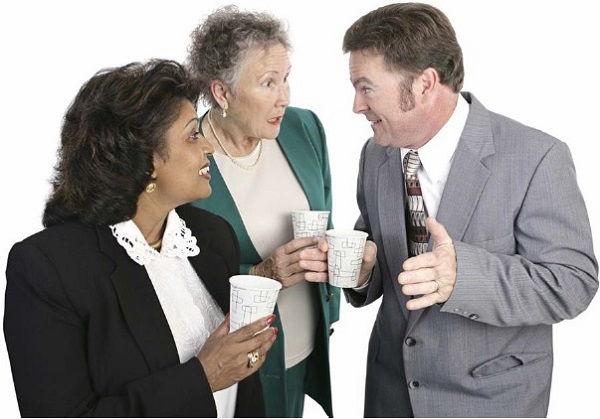 People don’t always practice Office Politics with promotion in mind. They might simply desire a greater power or influence. Many people who indulge in office politics have also have been found out as victims of low self-esteem. That makes them want that people respect them more. They can’t handle competition and would plot traps to get their competition out of the race, so they tend to discredit and malign competitors for their selfish gains.

Some in the industry say that Office Politics is not necessarily a wrong thing all the time. A deserving team manager may, through skillful manipulation, turn a decision his way and end up getting a promotion and a stable project for his team. In cases like these, he will need to work with people he closely trusts and has a comfort level with, as opposed to others. In this case, his personal motive ended up as a boon is disguise to others and they won’t ever accuse him of any wrongdoing.

Mind games are essential to get a large organization motivated and to prevent people from negative feedback. Mind Games also help in extracting truth from employees so not all mind games are bad. There are situations where employees get into a “No Bad News" mode where they suppress information that may trigger negative reaction from their boss, saying that the timing isn’t right.

However, it’s bad when people use Mind Games in Leadership. When a supervisor plays mind games with an employee, he is basically engaging in a game of "Divide and Conquer" where he is pitting employees against one another other so that they don’t unite and threaten his stance someday.

Cronyism is displaying favoritism towards long-standing friends, by ignoring their errors, not giving them corrective feedback, or by appointing them to positions of authority, in spite of their limited qualifications.

Places that practice cronyism are breeding grounds for counterproductive behavior, which is observed especially among those deserving employees who feel shortchanged and cheated.

When you are working in an organization full of ambitious people with different thought processes and priorities in life, Organizational Politics is inevitable. In a politically charged environment, employees need to understand that they have master the art of concealing weaknesses.

They cannot be overwhelmed in the face of these oppositions, but have to learn to take this in their stride. This is not to suggest that they have to play politics the way it is there in the workplace, but they have to treat Office Politics as the norm rather than the exception.