What is Web Driver in Selenium?

It is a web automation framework which allows us to execute test across various browsers. It can execute multiple tests over multiple browsers on multiple OS. WebDriver makes it possible to write a test script in Linux and run it in Windows. There are multiple programming languages which are supported by Web Driver such as Java, Python, Ruby, .Net, PHP to create test scripts.

In Selenium2, integration of Web Driver was considered which was designed to address few limitations of Selenium RC.

Web driver comes with another advantage which is its use on HTMLUnit browsers(HTMLUnit browser are headless browsers which means these are invisible to the user, in simple words they have no GUI), due to these testing on HTMLUnit browser is faster as these browsers save the time needed to load the page elements. This results in less execution time for test cases.

Browser vendors will ship their own WebDriver implementation, hence are tightly coupled to the browser giving a better testing experience.Modern Browsers such as Edge, Safari are introduced with the WebDrivers shipped by their vendors 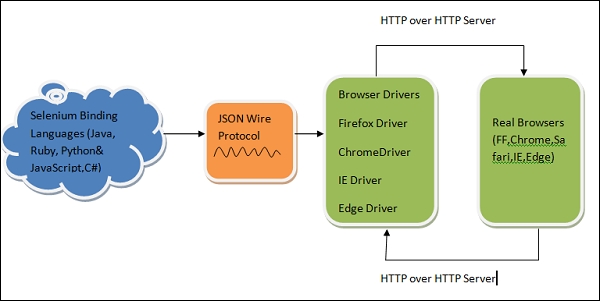 Enough of testing, selenium is not limited to testing. It can be put to use in −