What is hierarchical routing?

In hierarchical routing, the routers are divided into regions. Each router has complete details about how to route packets to destinations within its own region. But it does not have any idea about the internal structure of other regions.

As we know, in both LS and DV algorithms, every router needs to save some information about other routers. When network size is growing, the number of routers in the network will increase. Therefore, the size of routing table increases, then routers cannot handle network traffic as efficiently. To overcome this problem we are using hierarchical routing.

For huge networks, a two-level hierarchy may be insufficient hence, it may be necessary to group the regions into clusters, the clusters into zones, the zones into groups and so on. 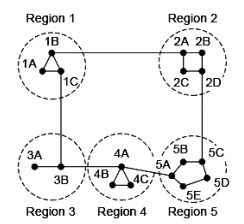 Let see the full routing table for router 1A which has 17 entries, as shown below −

Full Table for 1A

Hierarchical Table for 1A

Unfortunately, this reduction in table space comes with the increased path length.

Step 1 − For example, the best path from 1A to 5C is via region 2, but hierarchical routing of all traffic to region 5 goes via region 3 as it is better for most of the other destinations of region 5.

Step 2 − Consider a subnet of 720 routers. If no hierarchy is used, each router will have 720 entries in its routing table.

Step 3 − Now if the subnet is partitioned into 24 regions of 30 routers each, then each router will require 30 local entries and 23 remote entries for a total of 53 entries.

If the same subnet of 720 routers is partitioned into 8 clusters, each containing 9 regions and each region containing 10 routers. Then what will be the total number of table entries in each router.