What is Distance Vector Routing Algorithm?

Following are the features of the distance vector routing are −

Three keys to learn how this algorithm works are as follows −

Knowledge about the entire network

Routing only to the neighbours

Each route repeatedly shares its knowledge about the network only to those routers with the explicit connection. It transmits whatever knowledge it has about the complete network by all of its parts. This data is taken and stored by each neighbouring router and can upgrade the routers own data about the network. 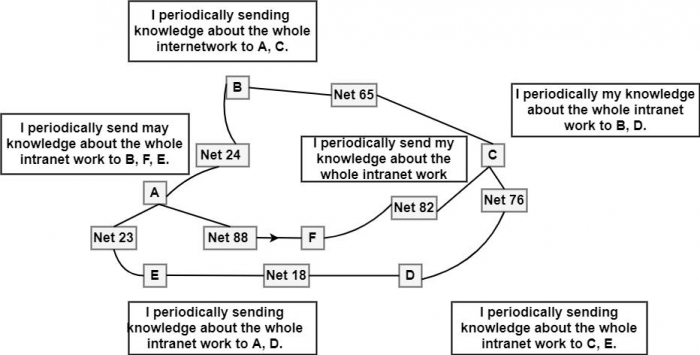 In distance vector routing, each router repeatedly sends its knowledge about the whole network with its neighbours. For example, after 30 seconds, each router shares its data about its neighbour's entire network.

In this, the rectangular box represents LANs. The number inside each rectangular box is the LANs Network ID. These LANs are linked by a router, described by the boxes such as A, B, C, D, E. The square boxes denote the connection of the routers to their neighbours.

This table has three columns which contain the information about network id, cost & Next Hop. Let the original tables for each router be.

When A can send his packet or routing table information to B router, E & C directly.

Similarly, B can send routing table information to router A & C and so on.

When A receivers are routing tables from B, E & F, it can update its table. Similarly, B receives A and C updates itself and so on, as shown in the new table.

New routing table for router A

New routing table for router B

Similarly, every router will update itself and so on. The updating algorithm checks that the router first adds Hop to the Hop count field for each advertised route. The router should apply these rules.

If the next-hop field is similar, the router must restore the table's entry with the displayed one.

If the next-hop field is not a similar