Token ring is a physical unidirectional ring, where the systems are connected to the ring through some interface.

The token ring source is responsible for removing the frame from the ring. In normal token ring operation, a station sending information holds the token until the sending data circles the entire ring.

After the sending station strips the data from the ring, it then issues a free token. The system regenerates the token after arrival of frame or after transmission of frame.

We divide token ring into two types which are as follows −

The efficiency of early token release is as follows −

Ring latency − The ring latency or propagation delay is a time taken by a single bit to travel a complete ring. We assume systems are equidistant.

If ring latency is ‘R’ and total number of systems is ‘N’ then time taken by a single bit to travel between two intermediate stations = R/N.

Where tx= frame transmission time and

If length of token is not given txt is negligible. Token transmission is overhead then it is not a useful protocol. If there is some kind of delay then we will add that token ring as it is with overhead.

Let us see the efficiency when everyone wants to transmit −

In delayed token release the token keeps holding until the last bit of the data packet transmitted, after the complete revolution of the ring and comes back to it.

Whenever a station acquires the token, then it does the following −

Given below is the diagram of delayed token release − 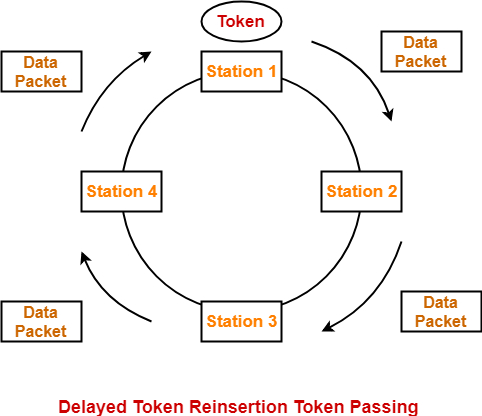 The efficiency of delayed token when everyone wants to transmit −