What is primary and secondary memory?

Memory is a storage part in a computer system. It is used to store the data, information, and programs at the time of processing on the computer. It stores data either temporarily or permanent. The main use of memory is saving and retrieving data. 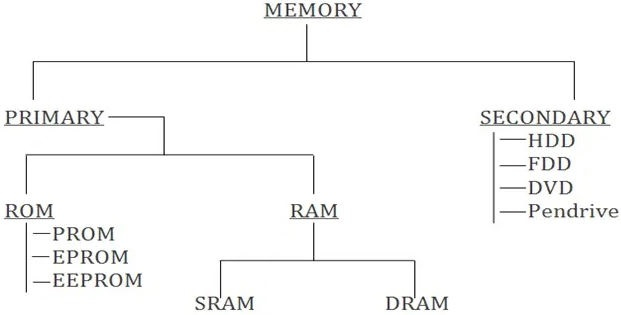 It is called the internal memory of the computer. And it is also known as main memory or Temporary memory. It holds the data and instructions that are presently working on the system or by the CPU. Primary Memory is called volatile memory, because when power is switched off it loses all data.

RAM is also of two types which are as follows −

ROM (Read Only Memory) − It stands for Read Only Memory. ROM is a permanent type of memory. ROM information is not lost when power supply is switched off. The Content of ROM is inserted by the computer manufacturer and permanently stored at the time of manufacturing. ROM cannot be overwritten by the computer. It is also called Non- Volatile Memory.

ROM memory has three types’ names which are as following −

It is an external memory of the computer. It is also known as Auxiliary memory or permanent memory. It is used to store different programs and the information permanently. We call it a non-volatile memory that means the data is stored permanently even if power is switched off.

The secondary storage devices are as follows −