In virtual channel sensing, a timer mechanism is used that is based upon information of durations of previous frame transmission in order to predict future traffic in the channel. It uses network allocation vector (NAV), which can be considered as a counter that counts down to zero.

Virtual channel sensing mechanism initialises a NAV for implementing timer mechanism. The maximum NAV duration is the transmission time required by frame, which is the the time for which the channel will be busy. At the start of transmission of a frame, the NAV value is set to its maximum. A non-zero value indicates that the channel is busy, and so no station contends for it. When the NAV value decrements to 0, it indicates that the channel is free and the other stations can contend for it. 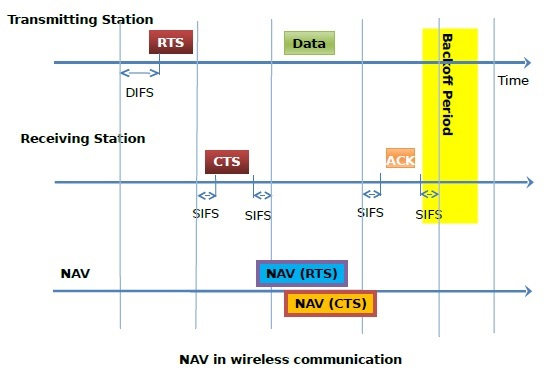 The steps in transmission as depicted in the above diagram are −