What is CSMA with collision detection?

Carrier Sense Multiple Access (CSMA) is a random-access protocol (multiple access protocol) that is used to minimise the chance of collision and increase performance. The main principle used is 'sense before transmit'. CSMA is using a shared medium which means any data passed with a common interconnection network.

Suppose the sender places a frame without sensing the status of the channel it will lead a collision with other nodes, if the other node also sends frames to the shared memory. So we sense before transmitting.

There are mainly two conditions for the carrier, which are as follows −

Step 1 − When the carrier is idle then only collisions occur otherwise the data is transmitted. So the main reason for collision is propagation delay.

Step 2 − The distance between sender and receiver high then the collision also high.

Step 3 − Suppose the sender wants to send the data to the receiver, at the same time the other node1, also uses the common channel then there is a collision. This is also called the propagation delay.

The important versions for avoiding collision are as follows −

Now let us see the concept of Collision Detection (CSMA/CD)

The concept of Collision Detection (CSMA/CD) is explained below in stepwise manner:

Step 2 − By terminating frames it would save time and bandwidth. This is called CSMA/CD.

Step 3 − It is mainly used LAN in the MAC sub player (part of data link layer network) and Ethernet.

CSMA/CD can be in contention, transmission, or idle state. Let us see the below diagram to understand the concept −

The main disadvantage is that it is not suitable for long distance transmission and it cannot be used in wireless technologies.

The algorithm of CSMA/CD is given below −

Step 1 − Check whether the station that wants to transmit the data senses is busy or idle. If a carrier is idle, then the transmission is carried out.

Step 2 − The transmission station detects a collision, by using the condition: Tt >= 2 * Tp where Tt is the transmission delay and Tp is the propagation delay.

Step 3 − Whenever it detects the collision the station releases the jam signal.

Step 4 − After collision has occurred, the transmitting station stops transmitting and waits for some random amount of time called the ‘back-off time’. After this time, the station retransmits again.

The flowchart of CSMA/CD is given below − 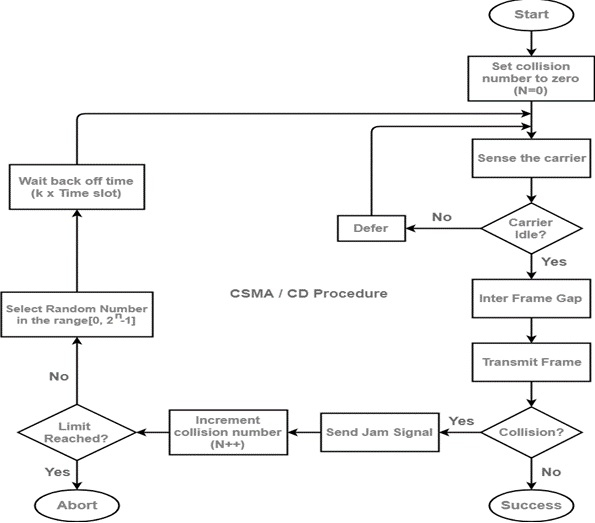