What is CSMA with collision avoidance?

Carrier Sense Multiple Access (CSMA) is a random-access protocol (multiple access protocol) that is used to minimise the chance of collision and increase performance. The main principle used is 'sense before transmit'. CSMA is using a shared medium which means any data passed with a common interconnection network.

Suppose the sender places a frame without sensing the status of the channel it will lead a collision with other nodes, if the other node also sends frames to the shared memory. So we sense before transmitting.

There are mainly two conditions for the carrier, which are as follows −

The Carrier Sense Multiple Access (CSMA) Protocol is explained below in stepwise manner:

Step 1 − When the carrier is idle then only collisions occur otherwise the data is transmitted. So the main reason for collision is propagation delay.

Step 2 − The distance between sender and receiver high then the collision also high.

Step 3 − Suppose the sender wants to send the data to the receiver, at the same time the other node1, also uses the common channel then there is a collision. This is also called the propagation delay.

The important versions for avoiding collision are as follows −

Now let us see the concept of Collision Avoidance (CSMA/CA)

The concept of Collision Avoidance (CSMA/CA) is explained below in stepwise manner:

Step 1 − CSMA/CA is a network multiple access method in which carrier sensing is used but nodes attempt to avoid collisions by beginning the transmission only after the channel is ideal.

Step 2 − It is used in wireless networks where the collision detection of the alternative CSMA/CA is not possible due to wireless transmitter dispensing they receive during the packet transmission.

Step 3 − CSMA/CA is unreliable due to the hidden no problem and exposed terminal. The solution is RTS/CTS Exchange.

Step 4 − If a computer wants to send data to a wireless network it will check any activity if it waits then after some time it again checks if there occur any other activities from another device it sends the data and waits to receive the acknowledgement from the data .

Step 5 − If it is not received, the sender can understand the data is not received. The RTS /CTS also work in this manner like the sender will ask a Ready To Send and if the receiver wants to reply it will send Clear To Send.

Step 6 − So the receiver will break all the connections and only make connections with the sender. By this we can avoid collisions.

Step 7 − CSMA/CA is used for transmission first and then only knows about collisions detected. It is used in wireless and wired technology. CSMA/CA is a protocol that operates in the data link layer of the OSI model. The access method used by IEEE 802.11 Wi-fi in CSMA/CA.

Let us have a look on Algorithm and flowchart of CSMA/CA for more detail understanding the concept:

The algorithm of CSMA/CA is as follows:

Step 1 − The station is ready to transmit. It senses the line by using any one of the persistent strategies.

Step 2 − If the found line is to be idle, the station waits for an IFG (Interframe gap) amount of time.

Step 3 − Then waits for some random time and sends the frame.

Step 4 − After sending the frame, it sets a timer and waits for the ACK from the receiver.

Step 5 − If the ACK is received before the expiry of timer, then the transmission is successful.

Step 6 − But if the transmitting station does not receive the expected ACK before the timer expires then it increments the back off parameter, waits for the back off time and re-senses the line.

The flowchart of CSMA/CA is as follows − 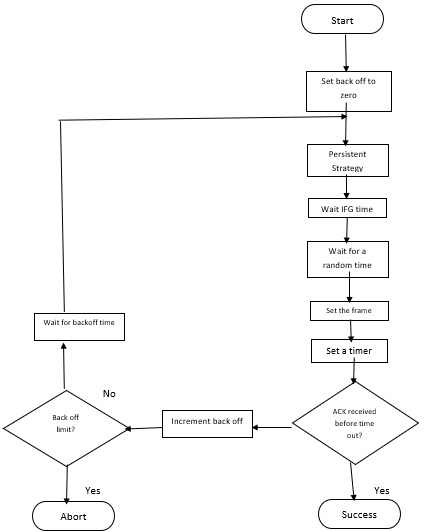