Non-persistent CSMA is a non – aggressive version of Carrier Sense Multiple Access (CMSA) protocol that operates in the Medium Access Control (MAC) layer. Using CMSA protocols, more than one users or nodes send and receive data through a shared medium that may be a single cable or optical fiber connecting multiple nodes, or a portion of the wireless spectrum.

In non-persistent CSMA, when a transmitting station has a frame to send and it senses a busy channel, it waits for a random period of time without sensing the channel in the interim, and repeats the algorithm again.

The algorithm of non-persistent CMSA is

It rate of collisions is much reduced than 1-persistent CMSA. This is because each station waits for a random amount of time before attempting retransmission. The probability that multiple stations will wait for same amount of time is extremely low. So, collision between contending stations is greatly reduced.

It reduces the bandwidth usage of network. This is because the channel remains idle even if there are stations who have frames to transmit. This occurs since each station wait for a random time before attempting retransmission. There may be multiple stations who are waiting while the channel is idle.

The throughput of a network system is defined as the number of successful transmissions per frame time. The following graph compares the throughput of non-persistent CMSA with that of other MAC protocols 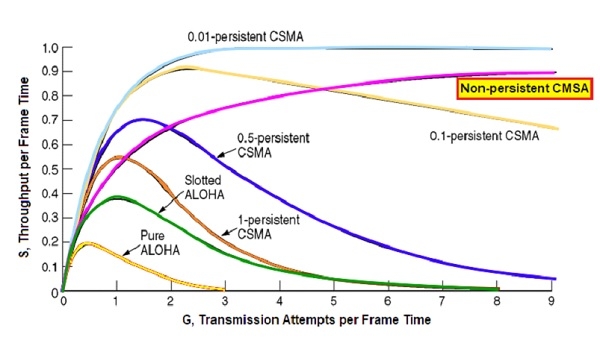