From ancient times, sunlight was used as a source of energy. It is believed that the knowledge of solar energy existed in some of the oldest civilizations like the Greeks, and Romans, though they have not used it for cooking. Food can be made by using the sunlight this principle comes much later and was developed approximately in the 1870s. The solar cooker is a low-tech device and can be made at a very less cost, however, it has its advantages and disadvantages.

What is a solar cooker

A solar cooker can be defined as a device that can use direct sunlight as a source of energy and is used for cooking. It works on the principle of the conversion of sunlight into heat energy (Mepits, 2022). In simple words, the sunlight heats the pot, it lights energy into heat energy, which is used for cooking food, or for pasteurizing the drink or any other food material (Thirugnanam, Karthikeyan & Kalaimurugan, 2020).

The process of interaction between the light energy and the material of the solar cooker that helps in turning the energy into heat is referred to as Conduction. 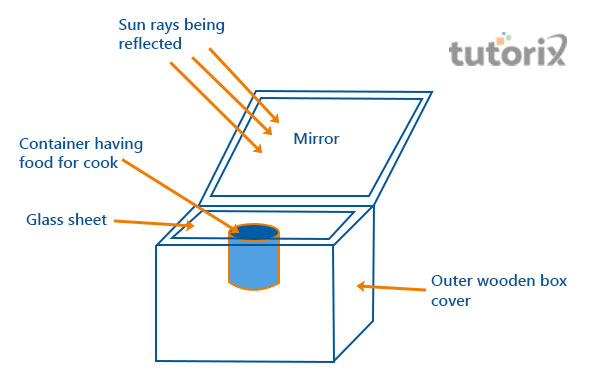 The basic structure of a solar cooker consists of a pan or pot and a mirror is a must (Omara et al 2020). . However basis on the structure of the solar cooker, there are mainly two types of solar cookers, Box type and Parabolic type 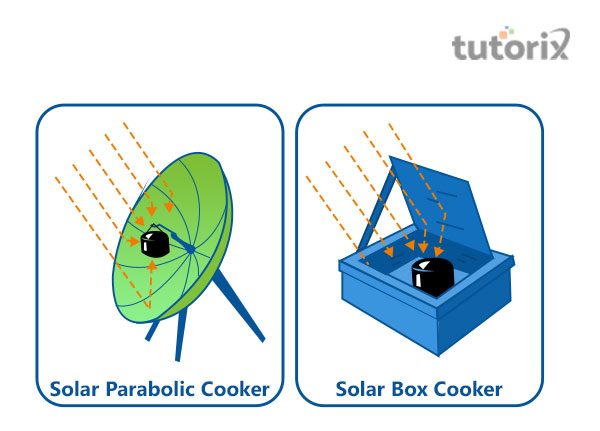 In this type of solar cooker, the heat gets reflected into a box, then it is trapped by the glass on the top and creates a greenhouse effect and in that process, the heat is produced. With using, this heat the food is cooked (Researchgate, 2022).

The most used type of solar cooker is a box type. It has a basic structure and three main components are used for making the solar cooker. One metal box is painted black from the inside, and very importantly a glass sheet, a plane mirror that will work as a reflector.

In parabolic type solar, where the cooking utensil is housed, the heat converges in that single point. The solar cooker heats up and it helps in cooking. A solar thermal collector is used for cooking food and pasteurising the water (Omara et al2020).

It can heat up in a very short time. This type of solar cooker is used since ancient times. It is believed that the idea of curving a mirror comes from the greek and roman civilisations. 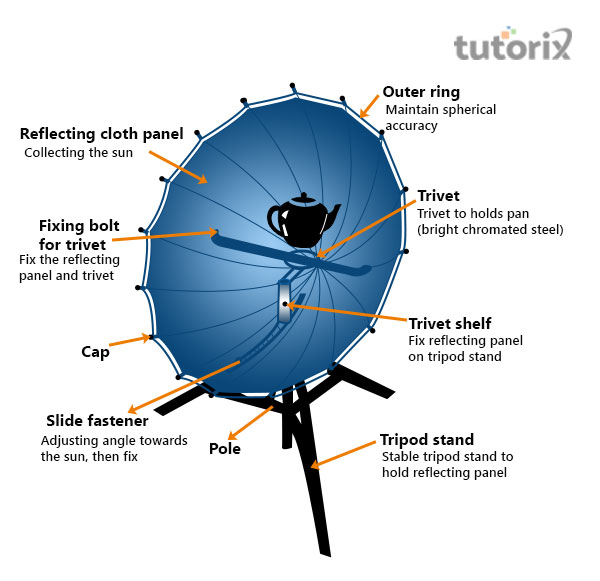 Advantages and disadvantages of solar cooker

As the sunlight cannot work directly, it needs heat conversion as the light waves interact with the molecules of the substance that is the solar cooker (Thirugnanam, Karthikeyan & Kalaimurugan, 2020). Many advantages of a solar cooker makes it popular; however, it has its disadvantages.

The solar cooker can be made at a bare minimum cost and with fewer components. This is the main reason why it is so popular (Researchgate, 2022). As it does not need fuels, on one hand, it saves money and on the other, it can reduce the pollution level for the betterment of our environment. Solar energy is freely available, anyone can make it of use, and the very low management cost is making it affordable for everyone.

As the solar cooker works only with solar energy, it becomes less effective on rainy days or even when it is cloudy outside (Thirugnanam, Karthikeyan & Kalaimurugan, 2020). Cooking in a solar cooker is a very time-consuming process compared to an oven and gas. In the time of preparing thick dishes, it becomes difficult with solar cookers. Even strong wind can hamper the cooking process.

Solar cookers are the simplest device that can be used for cooking any food. As it does not need fire, it is safe for use and environment friendly. For many people is easier to use for its inexpensiveness (Mepits, 2022). It simply harnesses the power of the sun and uses it for cooking, at your required temperature. The temperature can be manipulated and you can use it as in needs to cook the food. A solar cooker can simply let the UV rays in it and very easily transform them into light rays thatcannot escape.

A solar cooker is used for cooking food just by using solar energy. Its reflected panels are used for focusing the light on the black-colored pot inside the solar cooker. Cooking with solar energy can make the whole process simpler. It is very beneficial because it helps us in saving fuel and making the environment less polluted. Many people still do not have any idea about this simple and less expensive process; they still use ovens for cooking vegetables and other food items. When there is an unlimited supply of the resources like solar energy, it is better to cook in solar cookers.

Q1. How does a solar cooker work?

Q2. What are the types of solar cookers’?

Ans: Typically, two types of solar cookers are available in the market that is box type and parabolic. There are a few more like box ovens, cookers with parabola and cookers with tube.

Q3. Why do we use black color in a solar cooker?

Ans: As the black color is a good conductor and absorbs more heat, it is the most appropriate color for the solar cooker. The black surface helps heat the device faster.