We know that the path of satellite revolving around the earth is known as orbit. This path can be represented with mathematical notations. Orbital mechanics is the study of the motion of the satellites that are present in orbits. So, we can easily understand the space operations with the knowledge of orbital motion.

The length of Semi-major axis (a) defines the size of satellite’s orbit. It is half of the major axis. This runs from the center through a focus to the edge of the ellipse. So, it is the radius of an orbit at the orbit's two most distant points. 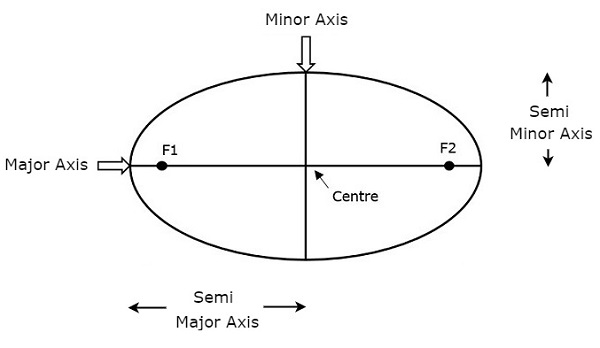 Both semi major axis and semi minor axis are represented in above figure. Length of semi major axis (a) not only determines the size of satellite’s orbit, but also the time period of revolution.

If circular orbit is considered as a special case, then the length of semi-major axis will be equal to radius of that circular orbit.

The value of Eccentricity (e) fixes the shape of satellite’s orbit. This parameter indicates the deviation of the orbit’s shape from a perfect circle.

If the lengths of semi major axis and semi minor axis of an elliptical orbit are a & b, then the mathematical expression for eccentricity (e) will be 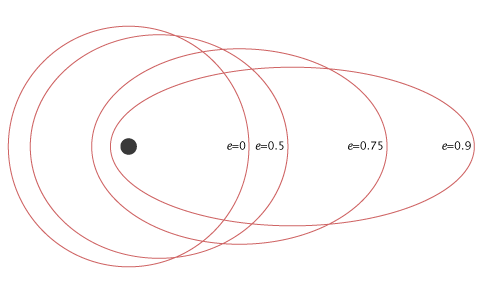 For a satellite, the point which is closest from the Earth is known as Perigee. Mean anomaly (M) gives the average value of the angular position of the satellite with reference to perigee.

Argument of perigee is measured in the orbital plane at earth’s center in the direction of satellite motion.

The angle between orbital plane and earth’s equatorial plane is known as inclination (i). It is measured at the ascending node with direction being east to north. So, inclination defines the orientation of the orbit by considering the equator of earth as reference. 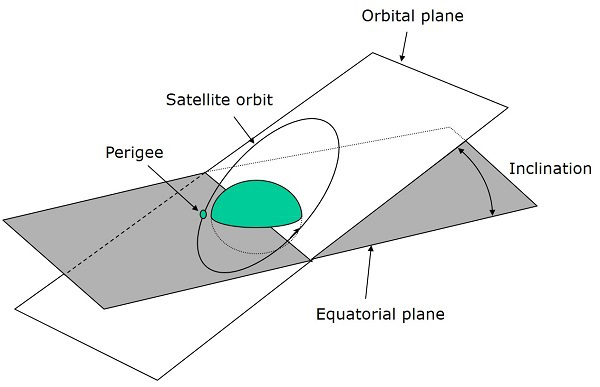 There are four types of orbits based on the angle of inclination.

We know that ascending node is the point, where the satellite crosses the equatorial plane while going from the southern hemisphere to the northern hemisphere.

Right Ascension of ascending node (Ω) is the angle between line of Aries and ascending node towards east direction in equatorial plane. Aries is also called as vernal and equinox.

Satellite’s ground track is the path on the surface of the Earth, which lies exactly below its orbit. The ground track of a satellite can take a number of different forms depending on the values of the orbital elements.

In this section, let us discuss about the equations which are related to orbital motion.

A satellite, when it revolves around the earth, it undergoes a pulling force from the earth due to earth’s gravitational force. This force is known as Centripetal force (F1) because this force tends the satellite towards it.

Mathematically, the Centripetal force (F1) acting on satellite due to earth can be written as

A satellite, when it revolves around the earth, it undergoes a pulling force from the sun and the moon due to their gravitational forces. This force is known as Centrifugal force (F2) because this force tends the satellite away from earth.

Mathematically, the Centrifugal force (F2) acting on satellite can be written as

Where, v is the orbital velocity of satellite.

Orbital velocity of satellite is the velocity at which, the satellite revolves around earth. Satellite doesn’t deviate from its orbit and moves with certain velocity in that orbit, when both Centripetal and Centrifugal forces are balance each other.

Therefore, the orbital velocity of satellite is

So, the orbital velocity mainly depends on the distance from satellite to center of the Earth (R), since G & M are constants.