Following are the three important types of Earth Orbit satellites −

Now, let us discuss about each type of earth orbit satellites one by one.

A Geo-synchronous Earth Orbit (GEO) Satellite is one, which is placed at an altitude of 22,300 miles above the Earth. This orbit is synchronized with a side real day (i.e., 23 hours 56 minutes). This orbit can have inclination and eccentricity.

It may not be circular. This orbit can be tilted at the poles of the earth. But, it appears stationary when observed from the Earth. These satellites are used for satellite Television.

The same geo-synchronous orbit, if it is circular and in the plane of equator, then it is called as Geostationary orbit. These Satellites are placed at 35,900kms (same as Geosynchronous) above the Earth’s Equator and they keep on rotating with respect to earth’s direction (west to east).

The satellites present in these orbits have the angular velocity same as that of earth. Hence, these satellites are considered as stationary with respect to earth since, these are in synchronous with the Earth’s rotation.

The advantage of Geostationary orbit is that no need to track the antennas in order to find the position of satellites.

The following figure shows the difference between Geo-synchronous and Geo-stationary orbits. The axis of rotation indicates the movement of Earth. 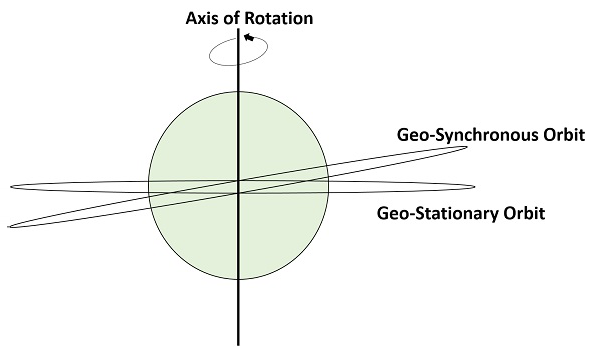 Note − Every Geostationary orbit is a Geo-synchronous orbit. But, the converse need not be true.

Medium Earth Orbit (MEO) satellites will orbit at distances of about 8000 miles from earth's surface. Signals transmitted from a MEO satellite travel a shorter distance. Due to this, the signal strength at the receiving end gets improved. This shows that smaller and light weight receiving terminals can be used at the receiving end.

Transmission delay can be defined as the time it takes for a signal to travel up to a satellite and back down to a receiving station. In this case, there is less transmission delay. Because, the signal travels for a shorter distance to and from the MEO satellite.

Low Earth Orbit LEO) satellites are mainly classified into three categories. Those are little LEOs, big LEOs, and Mega-LEOs. LEOs will orbit at a distance of 500 to 1000 miles above the earth's surface. These satellites are used for satellite phones and GPS.

This relatively short distance reduces transmission delay to only 0.05 seconds. This further reduces the need for sensitive and bulky receiving equipment. Twenty or more LEO satellites are required to cover entire earth.

The following figure depicts the paths of LEO, MEO and GEO 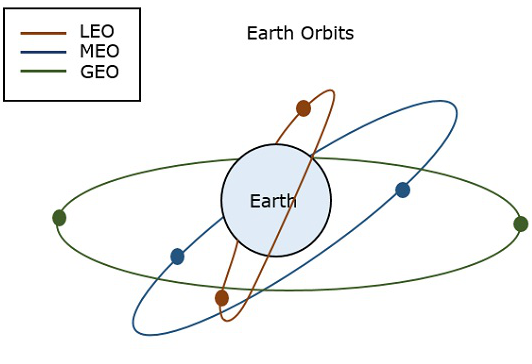 Here, a question may arise that with more than 200 satellites that are in geosynchronous orbit, how do we keep them from running into each other or from attempting to use the same location in space?

To answer this problem (question), international regulatory bodies like the International Telecommunications Union (ITU) and national government organizations like the Federal Communications Commission (FCC) designate the locations on the geosynchronous orbit, where the communications satellites can be located.

These locations are specified in degrees of longitude and are called as orbital slots. The FCC and ITU have progressively reduced the required spacing down to only 2 degrees for C-band and Ku-band satellites due to the huge demand for orbital slots.