If broadcasting takes place directly to home TV receivers, then that type of service is called as Direct Broadcast Satellite (DBS) service.

C-band users can subscribe to pay TV channels. These subscription services are cheaper when compared to cable because of the availability of multiple-source programming.

The block diagram of DBS TV receiver is shown in below figure. 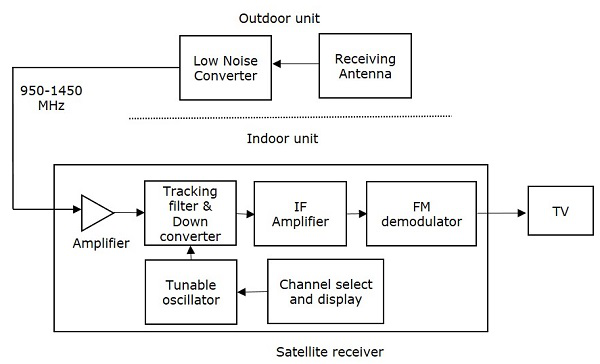 In general, the parabolic reflector is also used with the receiving horn antenna for more focusing of the beam.

In general, the signal fed to the indoor unit is a wideband signal. The frequency of this signal lies between 950 MHz and 1450 MHz. In indoor unit, this signal gets amplified by using an amplifier.

The amplified signal is applied to a tracking filter and down converter. It selects the desired channel and converts its frequency to an Intermediate Frequency (IF) of 70 MHz.

IF amplifier amplifies the signal strength in order to demodulate it properly. The baseband (demodulated) signal is used to generate a Vestigial Single Side Band (VSSB) signal. This signal is fed into one of VHF/UHF channels of a standard TV set.

The Community Antenna TV (CATV) system uses a single outdoor unit and multiple feeds. These feeds are available separately for each sense of polarization. Due to this, all channels will be available at the indoor receiver, simultaneously.

The block diagram of indoor unit of CATV system is shown in below figure. 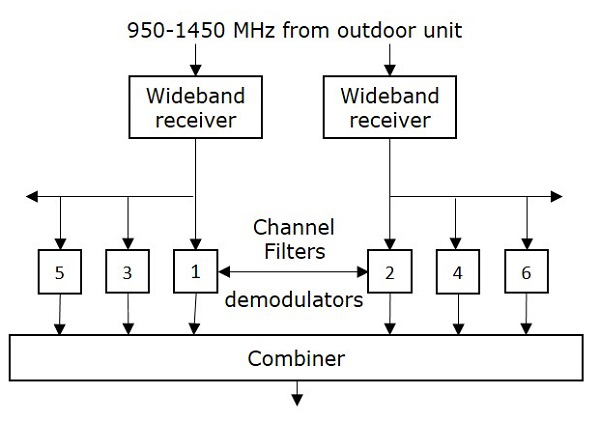 In this case, there is no need of separate receiver to each user. Because, all the carriers are demodulated in a common receiver-filter system. After that, the channels are combined into a multiplexed signal. This signal is then transmitted through a cable to the subscribers (users).