Many scientists have given different types of theories from early times. But, only Johannes Kepler (1571-1630) was one of the most accepted scientist in describing the principle of a satellite that moves around the earth.

Kepler formulated three laws that changed the whole satellite communication theory and observations. These are popularly known as Kepler’s laws. These are helpful to visualize the motion through space.

Kepler’s first law states that the path followed by a satellite around its primary (the earth) will be an ellipse. This ellipse has two focal points (foci) F1 and F2 as shown in the figure below. Center of mass of the earth will always present at one of the two foci of the ellipse. 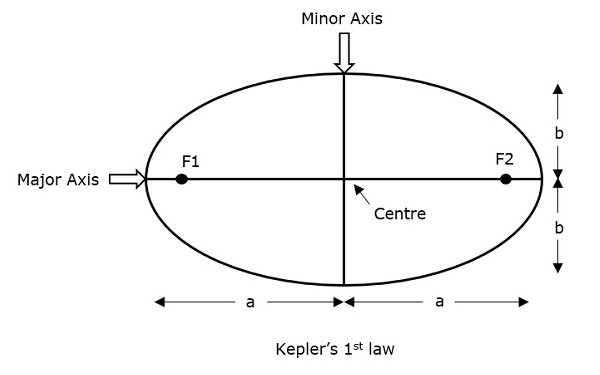 Eccentricity "e" of this system can be written as −

Where, a & b are the lengths of semi major axis and semi minor axis of the ellipse respectively.

Kepler’s second law states that for equal intervals of time, the area covered by the satellite will be same with respect to center of mass of the earth. This can be understood by taking a look at the following figure. 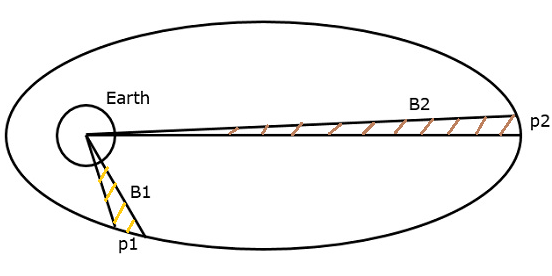 Assume, the satellite covers p1 and p2 distances in the same time interval. Then, the areas B1 and B2 covered by the satellite at those two instances are equal.

Kepler’s third law states that, the square of the periodic time of an elliptical orbit is proportional to the cube of its semi major axis length. Mathematically, it can be written as follows −

Where, ‘n’ is the mean motion of the satellite in radians per second.