It is essential that we have some basic knowledge of PN Junctions before moving on to learn the concept of Photovoltaic Effect.

The PN Junction was invented by Russell of Bell laboratories in the USA. It refers to a junction between two semiconductors, that is, P-Type and N-type. Russell discovered that the two semiconductors have an interesting behavior at the junction that causes conduction in one direction only.

In the diagram given above, at the junction −

The current obtained by electrons displaced by photons is not sufficient to give significant potential difference. The current is therefore contained to cause further collisions and release more electrons.

A solar cell utilizes the concept of a p-n junction in capturing the solar energy. The following figure shows the fermi level of a semiconductor. 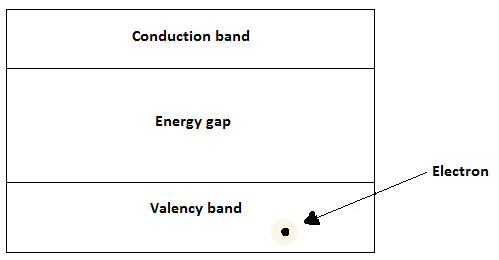 For a semiconductor to conduct, electrons must cross the energy gap from the valence band to the conduction band. These electrons require some energy to dislodge and move across the valence gap. In solar cells, photons emitted from the Sun provide the required energy to overcome the gap.

A photon incident on the surface could be absorbed, reflected, or transmitted. If it is reflected or transmitted, it does not help dislodge an electron and is thus wasted. Therefore, a photon must be absorbed to provide the energy required to dislodge and move electrons across the valence gap.

If Eph is the energy of a photon and EG is the threshold energy to cross the energy gap, then the possible outcomes, when photon hits the surface of a semiconductor are −

Where, k is the extinction coefficient.